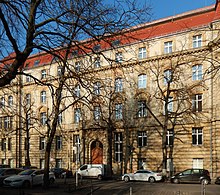 Headquarters of the Science and Politics Foundation in Berlin

History, organization and tasks of the SWP

The SWP was founded in Munich in 1962 . On January 21, 1965, the German Bundestag unanimously decided that the Federal Republic of Germany should join this foundation. In 2001 the headquarters of the foundation and its research institute were relocated from Ebenhausen near Munich to Berlin. Since 2001 it has been in a listed building on Ludwigkirchplatz .

In order to fulfill its purpose, the SWP, as a foundation under civil law , receives an institutional grant that is decided by the German Bundestag and paid from the budget of the Federal Chancellery . The grant is granted on the basis of an annual business plan to be drawn up by the SWP. The institutional grant covers 100% of the costs of the SWP's core activities. In addition, it can also implement collaborative research projects funded by third parties . In the 2016 financial year, the institutional contribution to the SWP totaled 12.3 million euros . In addition, she received 2.53 million euros from third-party funding.

The foundation board is the highest decision-making body and supervisory body of the foundation. It consists of three "banks":

There is also the President and two Deputy Presidents. While the president and a deputy president must also be personalities from science, business and public life, the other deputy is reserved for the head of the Federal Chancellery. If the SWP is also supported organizationally by the Chancellery, the Federal Government does not control the Board of Trustees. It can neither take over the leadership of this body nor dominate the majorities. None of the individual banks can achieve a simple majority on their own, and voting requires a two-thirds majority . The articles of association deliberately require the various representatives on the foundation board to work together.

The orientation framework is drawn up anew every two years by the research department and the SWP institute management, submitted to the Board of Trustees for confirmation and put to a vote. Overall, the orientation framework is geared towards general points in the two-year period and makes particular reference to the current and foreseeable prevailing situation in international politics. He names special thematic challenges and thematic lines. In the orientation framework for research 2017/2018, for example, a. the focus is on the United Nations Sustainable Development Goals (SDGs), flight and migration , the dissolution of regional orders in the Middle East or international crisis management .

Within the given framework, the SWP can freely and without restriction carry out and structure projects and research projects. This ensures that the SWP can deal with very long-term issues as well as current events in international politics. Analyzes and texts on the crisis in Ukraine or on the nuclear agreement with Iran serve as examples, as do the projects on refugee movements and development cooperation or Israel in a conflict-ridden regional environment: internal developments, security policy and external relations.

Around 60 scientists work in the SWP's research area. It is divided into the following eight research groups: EU / Europe, the Center for Applied Turkish Studies (CATS), Security Policy, America, Eastern Europe and Eurasia, Near / Middle East and Africa, Asia and Global Issues.

In total, the SWP employs over 140 people, not including visiting researchers and scholarship holders . By resolution of the Board of Trustees in January 2001, employees of the Cologne Federal Institute for Eastern and International Studies (BIOst) and the contemporary department of the Munich Southeast Institute (SOI) were integrated.

All employees of a research group have an academic education, whereby this is generally based on the respective topic of the research group. In addition to political scientists, there are also lawyers, physicists, natural scientists, economists and social scientists with various academic degrees at SWP. In addition, there are officers of the Bundeswehr who provide support to the SWP in the area of ​​security policy thanks to their special knowledge of the matter.

The analyzes and reports submitted by the SWP are all published.

The previous directors of the Research Institute for International Politics and Security were:

The first head of the SWP after its relocation to Berlin in 1998 was the political scientist Christoph Bertram , who had to manage the integration of the employees and the areas of responsibility of three institutes. The Middle East expert Volker Perthes has headed the institute since 2005, and with new methods he turned the SWP into one of the leading think tanks in the western hemisphere . From October 1st, he will be replaced by Stefan Mair, member of the executive board of the Federation of German Industries (BDI) and a non-resident fellow .

The President of the Board of Trustees is Nikolaus von Bomhard , who was Chairman of the Board of Management of Munich Reinsurance until 2017 , and his deputies are Federal Minister Helge Braun , Head of the Federal Chancellery , and Angelika Niebler , Member of the European Parliament . The Chairman of the Research Advisory Board is Christopher Daase , University of Frankfurt.

Around 30 employees work in the information infrastructure division of the SWP, in which information services are provided both for the scientists in the SWP and for the German Bundestag and the federal ministries. The SWP is also a leading member of the “Fachinformationsverbund Internationale Relations und Länderkunde” (FIV). The FIV operates one of the world's largest social science literature databases ("World Affairs Online"). This offer is made available to the (specialist) public via various portals, catalogs and indices and, with the specialist portal IREON , its own specialist information portal is operated.

Project "The Day After"

As part of the “The Day After” project, the SWP, together with the United States Institute of Peace (USIP), gave Syrian intellectuals and representatives of various political currents from Syria the opportunity to express their ideas on Syria's political, constitutional and economic development after a possible replacement of the government of Bashar al-Assad . In 2011/12, many governments and observers were convinced that the uprising in Syria , like in Egypt and Tunisia, could lead to the overthrow of the president. The results of this project were made transparent to the wider Syrian and international public in the report "The Day After. Supporting a Democratic Transition in Syria". The project has not dealt with ideas, plans or preparations for an overthrow or regime change. In the aftermath of the project, some Syrians founded an NGO called “The Day After” to publicize and discuss the results among Syrians and to unite them through projects in the areas of transitional justice, securing documents and protecting national heritage To contribute to a post-war order.

A paper with the title “New Power - New Responsibility” that was developed between November 2012 and September 2013 together with the German Marshall Fund calls for Germany to assume more responsibility in dealing with “disruptors of the international order”. It calls for Germany and the EU to be more willing to act in terms of security policy. Among other things, it says: “Europe and Germany must therefore develop formats for NATO operations in which they are less dependent on US aid. That requires more military effort and more political leadership. Above all, Europe must do more security measures in its own neighborhood; that is Europe's own responsibility. Germany must make a contribution commensurate with its weight. ”The paper received a lot of attention and is said to have exerted considerable influence on prominent members of the German government, while it was heavily criticized by representatives of the peace movement. Most recently, when Federal Defense Minister von der Leyen presented the new “White Book”, Volker Perthes emphasized that Germany was “a responsible middle power that, together with others, must maintain and mediate the European and global order”.

In November 2010 and January 2011, Wikileaks published memos from employees of the US Embassy in Berlin on two events in which SWP Director Volker Perthes had participated in December 2009 and January 2010. Among other things, it was about the transatlantic differences of opinion about how to deal with Iran. At the event in January 2010, Perthes raised the question of whether the United States was considering other than warlike or military means to prevent a possible nuclear “outbreak” in Iran. This question was based on the assumption that such programs (cyber attacks or other forms of sabotage that could override parts of the program without starting or provoking a war) already existed. This assumption was also expressed by Perthes in an article on Open Democracy from January 2010. That it was true became apparent at the latest when reports about Stuxnet became public, from which it emerged that the Stuxnet attack must have started at least six months before the conversation at the US embassy in January 2010.

Speaking to the Guardian about the event at the US embassy in January 2010, Perthes said that he had stated that "unexplained incidents" or "computer crashes" were better than military strikes and that military strikes or escalation with Iran were for everyone Case would have to be avoided.