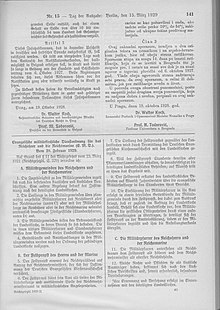 The term military chaplaincy describes the work of clergymen of the various religions in the military .

Religious acts of worship before and after armed conflicts have been known since ancient times. The Greeks had field preachers who prayed and made vows and used words and battle songs to spur soldiers on to bravery and obedience. The Romans gave the priest of the god of war Mars twelve young men with whom he accompanied the Roman troops. In armed conflicts, the priest threw the first lance into enemy territory. The fixed Roman camps had their own cult rooms with sacrificial altars; the mobile troops carried a cult tent with them. Evidence of military chaplaincy can be found from the time since the Edict of Milan in 313 AD. Emperor Constantine took bishops with him in the campaign against the Persians and had weapons and standards marked with the sign of the cross. After the Christianization of the Germanic peoples, priests can be found in their armies, some of whom exercised military service and some pastoral care. At the first German National Council in 742, clergymen, with a few exceptions, were forbidden from participating in wars and from carrying weapons. Charlemagne took over the institution of adding field chaplains to the armies going to war. This military chaplaincy was limited to the duration of a campaign. Only with the development of the Landsknecht system and the first approaches to a standing army did the military chaplaincy become a permanent institution. The priests were under oath and were subject to military discipline. Military pastoral care took off in the 16th century with the establishment of a general vicariate for the army. With the Reformation there was a denominational differentiation.

Military chaplain and 2nd pastor of the Garrison Church , Carl Aereboe, swore in the new recruits on November 23, 1914 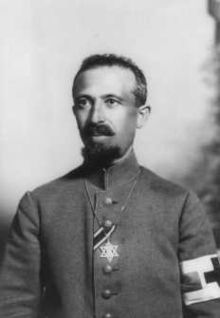 The organization of the military chaplaincy in the Prussian army was based on the conditions of the sovereign church regiment . A Jewish field rabbinate was only introduced at the beginning of the First World War .

The field chaplains were in three hierarchical relationships:

The personnel communities of the soldiers and their relatives that emerged in the garrisons were temporarily detached from the regional church and assigned to a separate church with its own consistory as the highest administrative body. In 1811 this "military church" was dissolved and merged with the regional church, and the Evangelical Upper Church Council took the place of the consistory (at least in times of peace) . At the beginning of the 20th century, this merger was canceled and the military chaplaincy was again outsourced to its own administrative and management structure.

This arrangement initially only affected the Prussian, Protestant regional church . There was also a Catholic military chaplaincy, which was treated equally from 1848.

The chief chaplain was the field provost . All field preachers and military pastors were subordinate to him. There was one Protestant and one Catholic field provost in the Royal Prussian Army. The Catholic incumbents mostly had episcopal ordination. In other German states there was also this title in some cases;

The military chaplain was appointed by the commandant. Elected candidates for the preaching office or already employed clergy were commissioned with the exercise. In addition to the full-time military chaplains , the military chaplaincy was transferred to suitable civil chaplains in small garrisons on a part-time basis.
The military chaplains were among the top military officials in the officer rank; if they were in regalia they were to be greeted militarily by NCOs and men . The German field rabbis of the First World War wore the field-gray army uniform with an armband with a red cross. The Star of David was worn on a necklace.

The individual offices in their hierarchical structure (Protestant and Catholic):

"The field chaplains should speak to the soldiers' conscience and make military service appear to them as an inevitable matter that is important for the existence of the Prussian state."

After the founding of the Reich in 1871 and with the military service regulations of 1902, a uniform military chaplaincy was set up for Prussia and all other German states. Bavaria , Württemberg and Saxony initially maintained their own organization of military chaplaincy. However, it was adapted to the Prussian model during the First World War. The organizational form of military pastoral care created in the 19th century continued in this form until the end of the First World War.

A military pastor was appointed in Württemberg by the king and installed by the bishop. The parish was also assigned a garrison sexton.

The military chaplaincy regulated for the Reichswehr by Article 27 of the Reich Concordat (also referred to there as army chaplaincy ) was only guaranteed for the army and navy. It was therefore not present in the Wehrmacht's air force. In disregard of the Versailles Treaty, the secret annex to the Concordat already contained regulations for candidates for priesthood and clergy in the event of the introduction of compulsory military service and mobilization. Pastoral care was provided by military chaplains . At the beginning of the war in 1939 there were around 200 full-time ("active") Wehrmacht priests. In addition, around 300 war pastors for the duration of the war (aK) were hired as Wehrmacht officials who were supposed to return to civil pastoral care after the end of the war. At the beginning of the war against the Soviet Union in 1941 there were a total of 910 war pastors, half Protestant and half Catholic. War pastors is the name for the priests and pastors who served in the Wehrmacht as volunteers or conscripts as field chaplains during World War II .

There was no military chaplaincy in the National People's Army of the German Democratic Republic .

Critics complain that the structure of the military pastoral care would formally detach soldiers with spouses and children from their communities and assign them to the respective military community. However, their focus is often not the location of the soldier or the place of residence of the family. This would create responsibilities over great distances. This is one of the reasons why the areas of jurisdiction of the military bishops are often ignored in weddings and baptisms. Military chaplains are also not responsible for civil servants or former soldiers. Therefore, when the soldier and his family leave active service, they are subject to the jurisdiction of the local bishop again. The care of former soldiers by organizations such as the Community of Catholic Soldiers only partially compensates for this.

In September 2012 the Ecumenical Initiative for the Abolition of Military Pastoral Care was founded. She sees the military chaplaincy as "a remnant from the time when throne and altar, secular and spiritual power still made common cause" and criticizes that it is now organizationally integrated into the Bundeswehr as a "small wheel in the big military machine" and therefore by dependent on her. The initiative is supported by a wide range of groups from the peace movement.