Neutiflis , a German district of Tbilisi, 1900

German in the Caucasus 1914

After Georgia 2,629 emigrated 1817 to 1819 Swabian radical pietists (in the literature as "separatists", since they seceded from the state church). They had asked Tsar Alexander I for a permit to settle. It was granted in May 1817. The first convoy of settlers arrived in Georgia in December of the same year.

Around 500 extended families founded eight colonies near Tbilisi in 1818 , supported by the Russian government. In the colloquial language they were soon called the "Schwabendörfer". The largest place was Katharinenfeld , where initially 95 families lived, later 116 families. The name should honor the Württemberg Queen Katharina , the sister of Tsar Alexander I. There were five football teams in the village, a German newspaper, a primary school, a Lutheran church with a choir, a hunters' association, a theater group and a city park. Marienfeld , Elisabethtal , Alexandersdorf and Petersdorf made a name for themselves because of their dead straight, cobbled streets. They later split off other settlements from these first colonies, such as Freudenthal (1842) and Alexanderhilf (1857).

German colonists also settled in Tbilisi. They built the German district of Neutiflis , worked as craftsmen, merchants and hoteliers. A German grammar school and an Evangelical Lutheran church were built. The settlements of Neudorf , Lindau and Gnadenberg near Sochumi emerged in Abkhazia . In 1918 there were more than 20 villages founded by Caucasian Germans in Georgia.

The German Baltic researcher Friedrich Parrot reported from his expedition to Mount Ararat in 1829 that he had met Württemberg settlers in the bazaar of Yerevan : “Even small items [...] from the East were bought at the speed, and that is we wanted to move away when, in order to vividly visualize the contrast between this oriental hustle and bustle and European character, two women from Württemberg with five children rode across the bazaar and spoke to each other in genuine Swabian dialect, without also suspecting that in this crowd of people there could be an ear receptive to their language. "He listed their settlements and visited Katharinenfeld and Elisabethtal near Tbilisi himself :" These branches give way in their entire appearance according to type, national culture, vehicle, equipment Lifestyle, clothing and language are known at first glance as German branches d therefore contrast in a way that is very advantageous for them with the abodes of the natives, especially if one has only lived among the latter for a long time, as was the case with me. [...] Finally, after a five-hour ride, I saw the German colony high on the left bank of the river [ie the Chrami ], unmistakably in the regularly built, white houses with neat windows, doors and chimneys; I rode up happily, it was Katharinenfeld. "

From 1906 to 1922 Kurt von Kutschenbach published the German-language weekly newspaper “ Caucasian Post ” in Tiflis , which was called the “only German newspaper in the Caucasus” . The editor-in-chief was the writer and journalist Arthur Leist .

The first German colony in Azerbaijan was Alt Katharinenfeld in 1818 (was given up again in 1819), another shortly afterwards on the other side of the Schamchor River in Annenfeld . Helenendorf , today's Göygöl , was founded in 1819 by 194 Swabian families. They came to Azerbaijan via the North Caucasus and Tbilisi. Helenendorf became the largest German settlement in Azerbaijan. The first Evangelical Lutheran church in the country was built there in 1857.

Between 1888 and 1914, six other German communities emerged: Georgsfeld (1888), Alexejewka (1902), Grünfeld and Eichenfeld (1906), Traubenfeld (1912) and Jelisawetinka (1914). In the 1920s, the German villages Marxowka and Kirowka were added. Its founders came from the original communities around Helenendorf and Annenfeld. In the 1920s there were several German-language communist newspapers that also received state support, including Lenin's Way and Bauer und Arbeiter .

The German consul in Constantinople estimated the number of German colonists living in Azerbaijan at around 6,000 people in 1918. They made the fertile foothill steppe arable. From 1860 they concentrated on viticulture. At the end of the 19th century, 58% of the wine in the Elisabethpol governorate was made by the Vohrer and Hummel brothers from Helenendorf.

Settlers in the North Caucasus

As early as 1880, the first 17 German families settled in a place that was to become known as Gnadenburg . Most of them came from the Bavarian Middle Franconia and from Württemberg. With the contractual purchase of the land on May 15, 1881, Gnadenburg was officially founded. The organizer of the establishment of the village was the Bavarian Lutheran pastor Samuel Gottfried Christoph Cloeter (1823-1894), who worked from 1861 to 1880 in Illenschwang , a village in the then Dinkelsbühl district . He coined the name Gnadenburg because the grace of God is like a safe castle. He cultivated a decidedly eschatological and chiliastic piety, which counted on the early appearance of the anti-divine power of the Antichrist. In doing so, he represented the reading that had already led separatist pietist circles to emigrate to the Caucasus in the late 18th and early 19th centuries: only in Russia could one evade the rule of the Antichrist. This view was derived from a specific interpretation of certain Bible passages such as B. Ezekiel 38, where it says in verse 3: "Thus says the Lord GOD: Behold, I want to you, Gog, who are the chief prince of Meshech and Tubal!" Meschech and Tubal were interpreted as Moscow and Tobolsk and thus as pars pro toto for Russia. With this teaching, Cloeter had succeeded in persuading pious families in the Franconian-Swabian region of his parish in Illenschwang to emigrate. In 1882 there were already 52 families living in the Gnadenburg colony. Cloeter and his followers viewed the German Protestant state churches very critically and wavered between a complete withdrawal from the national church and a moderate inner-church distance, as is the case for example. B. was practiced in the community movement. So the settlers in Gnadenburg initially oriented themselves towards a rather free church community similar to the Moravian Brethren, but in the course of the decades they came closer and closer to the Lutheran church again. In 1933 the Gnadenburg Protestants officially joined the Lutheran Church of Russia. From 1892 Gnadenburg received various ecclesiastical buildings and facilities: a church with a bell tower, a school house and a kindergarten as well as a rectory. The settlers lived from growing grain and wine as well as from handicrafts and trade. In 1941 around 900 people lived in 159 families in the village. At the end of 1941 the entire German population of Gnadenburg was deported to Kazakhstan and the place was renamed Winogradnoje (= Weingartendorf). Ossetians and Russians settled there. 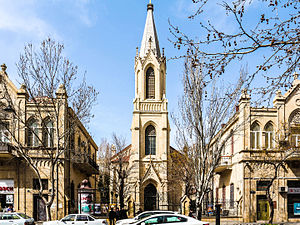 Like the entire Russian border area, the colonies were affected by the war with Persia from 1826–1828 . Many of the colonies were invaded by marauding Kurds in 1826 , who , according to Parrot , killed 30 people from the 85 families of Katharinenfeld and took 130 away. When Parrot visited in 1829, half of them were still missing. He met women who were returning from the comparatively mild captivity of a " Tatar chief", where they had been pressured to accept Islam . The naturalist also reports a case in which a man received a letter from his abducted wife, in which she declared her marriage to a Persian clergyman and absolved him of his marriage obligations.

After the formation of independent republics in the South Caucasus after 1917, the German colonists united to form the Transcaucasian German National Council with its seat in Tbilisi. After the occupation of Georgia and Azerbaijan by the Soviet Union in 1921, Katharinenfeld was renamed in Luxemburg and in 1944 in Bolnissi . Marienfeld became Sartischala , Elisabethtal became Asureti and Helenendorf became Xanlar . Alexandersdorf was incorporated into Tbilisi.

In the 1930s, the German colonists in the Caucasus were particularly exposed to political persecution. In 1935, 600 Germans from Azerbaijan were deported to Karelia . In Luxembourg , Georgia , 352 residents were arrested, abducted or murdered.

In 1941 there were over 24,000 German colonists in Georgia and more than 23,000 in Azerbaijan. In the same year, Stalin relocated all Caucasian Germans who were not married to local residents to Kazakhstan and Siberia within a few months . The basis was an ordinance of the State Defense Committee "On the resettlement of Germans who inhabit the territory of the Georgian, Armenian and Azerbaijani Soviet Republics" of October 8, 1941. Over 45,000 Caucasian Germans were deported between October 15 and November 12, 1941. The houses of the German settlers were given to migrants from other regions of Transcaucasia. The Evangelical Lutheran Church in Tbilisi was demolished by German prisoners of war in 1946 and 1947 .

Only a few Caucasian Germans returned to the Caucasus in the post-war period. Until 1955 they were forbidden to leave Central Asia and Siberia. In 1979, 2,053 Germans were allowed to return to Georgia. In 2002, around 30 older women of German descent were still living in Bolnissi. There is a German parish hall there. On the city's German cemetery, which was leveled under Stalin, there is now a memorial commemorating the colonists in Georgia.

In 1991, the Verein Einung - Association of Germans in Georgia was founded in Tbilisi . In 2000 it had around 2,000 members. Recently, young people have shown an increasing interest in their German ancestors and their culture. Often this is closely connected with the Protestant faith, so that the Evangelical Lutheran Church in Georgia tries hard to help these young people in its youth work.