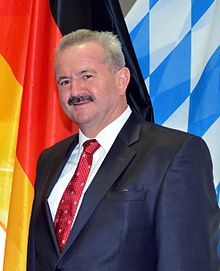 Reimund Neugebauer (born June 27, 1953 in Esperstedt ) is a German engineer and university professor who works in the field of production technology. Since October 1, 2012, he has been the 10th President of the Fraunhofer-Gesellschaft .

After completing his Abitur with accompanying professional training as a mechanical engineer , Neugebauer studied mechanical engineering at the Technical University of Dresden, specializing in machine tool design . After graduating with a diploma, he worked as a research assistant and senior assistant at this chair. In 1984 he received his doctorate on the subject of computer-aided processing of finite element calculation models for machine tool structures . Between 1985 and 1989 he worked in the Combine Umformtechnik Erfurt in various tasks in basic development and automation technology. In 1989 he completed his habilitation on the subject of developing flexible molding sheet metal processing systems . In the same year he was appointed lecturer at the TU Dresden, where he headed the Institute for Machine Tools from 1990.

In 1993 he was with the representation wise guidance of the Chair of Machine Tools at the Technical University of Chemnitz in charge and finally received the call to 1995 full professor and chair holder . From 2000 to 2012 he was managing director of the Institute for Machine Tools and Production Processes (IWP) at the TU Chemnitz, from 2003 to 2006 he was also dean of the faculty for mechanical engineering.

From March 20, 2006 to October 26, 2007, Reimund Neugebauer was a member of the administrative board of Landesbank Sachsen .

Neugebauer is a member of numerous national and international scientific societies and associations. He belongs to the Working Group for Forming Technology (AGU), was President of the Scientific Society for Production Technology (WGP) from January 1, 2010 to December 31, 2011 and is a full member (Active Member) of the International Academy for Production Technology (CIRP), whose annual meeting 2007 from IWU in Dresden. He is also a member of the German Academy of Science and Engineering (acatech) and is Honorary President of the Saxony Industry Association in 1828 . Since 2014 he has been a member of the National Academy of Sciences Leopoldina and a member of the steering committee of the innovation dialogue between the federal government, business and science. Since 2015 Reimund Neugebauer has been one of the two chairmen of the high-tech forum, which, as the central advisory body of the federal government, supports the further development and implementation of the high-tech strategy.

Neugebauer is an honorary member of the jury for " Top 100 ", an award for the most innovative medium-sized German companies.

President of the Fraunhofer Society