The Amur leopard ( Panthera pardus orientalis ) is a subspecies of the leopard that was originally native to northeast China , northern Korea, and southwest Russia's Primorye region . Since 1996, the Amur is on the endangered Red List species the IUCN as the extinction threatened ( Critically Endangered out); in 2007 there were only 14–20 adults and 5–6 young animals left in the wild. Outside of Russia, the species was extinct. Through the efforts of animal rights activists and after the designation of large protected areas in Russia, the population of the Amur leopard has now recovered somewhat; In mid-2015, the population in Russia and China was estimated at 86 wild specimens. This means that the number of Amur leopards in the wild has more than quadrupled since 2007.

Amur leopards differ from other subspecies by their thick fur, which is strong and uniformly drawn. Leopards from the Amur River Basin , the mountains in the northeast of the People's Republic of China and the Korean Peninsula have pale cream-colored coats, especially in winter. The rosettes on the flanks are 5 × 5 cm in size, up to 2.5 cm apart and consist of dense, closed rings that are darker in the middle.

Their fur is soft and consists of long, thick hair. The hair on the back is 20-25 mm long in summer and 50 mm in winter. The winter coat varies from light yellow to yellowish-red with a golden tint or rust-colored to reddish-yellow. The summer fur is brighter and more intense. They are quite small in physique. Six males were 107-136 cm long with a 82-90 cm long tail and a shoulder height of 64-78 cm. They weighed 32.2-48 kg. Female animals weighed 25-42.5 kg. 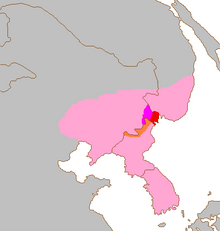 The former distribution area has shrunk to the red area

Amur leopard at the Pittsburgh Zoo

Amur leopards were formerly native to northeast China and the Korean peninsula, probably as far as Beijing . In the middle of the 20th century its range in Russia was limited to the extreme south of the Ussuri region and extended from 44 ° N from the coast of the Sea of Japan to the south to 43 ° 10 'N along the coast, from there to the west Direction to the north of the Suchan river basin, included the source of the Ussuri and two of the right tributaries in its upper reaches. From there the distribution area extended to Lake Chankasee . In the 1950s, leopards were observed 50 km north of Vladivostok and in the Kedrovaya Pad nature reserve . They are mainly found in the mountains and in areas where wild sika deer live or where agricultural game keeping is practiced. In winter they stay in snow-free, rocky southern slopes. In the 1970s, the Russian population was fragmented into three independent, small sub-populations.

The number of Amur leopards living around the world continued to decline up to the year 2000, the decline was particularly pronounced in China. Many populations had shrunk so much that there was inbreeding and degeneration . In China and the Korean Peninsula, Amur leopards have been considered extinct since 2007. According to the last census from 1998, fewer than ten animals lived in Jilin Province and possibly a few in Heilongjiang Province . The individuals were so widely dispersed that finding a partner and reproducing were difficult.

Since the turn of the millennium, the world's last, survivable and wild population of the species has been located in the southwest of the Russian Primorye region in an area of ​​around 3000 km 2 along the border between China and North Korea . According to WWF , 70% of this habitat in Russia has now been designated as a national park, and within 15 years the number of leopards living there has doubled to around 60 animals today. At the initiative of animal welfare organizations, the Russian government has launched several programs since 2013 that aim to further stabilize the leopard population there, including by reintroducing animals born in zoos and enlarging the protected areas. According to WWF, the efforts are showing initial success and their number is slowly increasing. In the meantime, some leopards have crossed the Russian-Chinese border, so that the species is now native to China again.

The territory of Amur leopards is usually in a river bed and extends to the natural topographical boundaries of the area. The territory of two individuals sometimes overlaps, but only slightly. Depending on gender, age and size of the family, the territory of an individual varies from 50–300 square kilometers. Neighboring individuals use the same wildlife trails, migration routes, and even places to rest for years.

The average life expectancy of the Amur leopard in the wild is unknown. In zoos, individual specimens lived to be over 21 years old; in the wild this value is probably much lower. Amur leopards are sexually mature after two to three years. After birth, young animals stay with their mother for between one and a half and two years. Adult animals live and hunt alone. The only exceptions are the mating seasons and, in the case of females, the rearing of the young.

The prey animals of the Amur leopard include the Siberian musk deer , wild boar , elk and Siberian deer . In rare cases, for example when there is a shortage of food, the Amur leopard also eats smaller animals such as rabbits or even mice. Hunting is mainly done in the early morning hours. A natural predator and competitor in the fight for prey used to be the Siberian tiger in particular , but its population has also declined significantly today.

Since many of the animals are already related to one another, matings between siblings or offspring and parents have become the rule rather than the exception. In extreme cases, this inbreeding can lead to malformations and even infertility of the offspring.

Until the 1990s, the threat from poachers was also a threat to the species’s survival.

Today around 170 Amur leopards live in zoological gardens, which can be traced back to nine founder animals. However, the exact subspecies of one of the founding males is not certain.

The ALTA ("Amur Leopard and Tiger Alliance") is an initiative of Russian and Western nature conservation organizations that aims to protect the population of the Amur leopards and Amur tigers living in the wild in the long term. To this end, the initiative has set itself the goal of regaining a population of around 100 Amur leopards in the Russian Far East and in the neighboring northeast of China. For this purpose, it is planned to build up a second population of around 60 animals at another location in the former range.