Acanthostega (from ancient Greek άκανθα akantha , German 'thorn, sting' and στέγη stege 'blanket, cover') is an extinct genus of vertebrates (Vertebrata), which is one of the main group representatives of the terrestrial vertebrates (Tetrapoda), but has spent its entire life in the water . Acanthostega isof particular importancefor evolutionary biology , as it is a mosaic shape that is close to the origin of the tetrapods. Only the type A. gunnari , the fossil of which was found in 1933 in 365 million year old sedimentary rocks from the time of the Upper Devonian in Greenland , has so far been scientifically described . 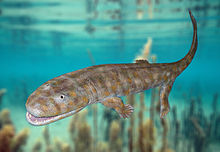 The anatomy of its fore and hindquarters shows that the typical four limbs of terrestrial vertebrates must have developed in the water. The still widespread assumption that the terrestrial vertebrates evolved from coelacanth , which used their muscular, tassel-like fish fins for occasional shore leave, is therefore questionable. Rather, Acanthostega already moved with four leg-like limbs on the swamp floor overgrown with aquatic plants , similar to what today's lungfish do with their fleshy fins. A reconstruction of his extremity bones shows that they could not have carried the heavy body in the country. In addition, breathing Acanthostega yet have gills and not lungs , that was clearly a water dwellers , which deals with four legs and not by kicking in the waters continued moving. An analysis of the skull bones also showed that Acanthostega was possibly already using a bite technique to acquire food and not, like the fish living in the water, caught the prey by sucking in and sucking in.