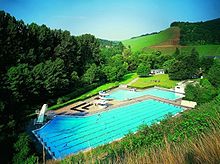 Mertesdorf ( Moselle Franconian : Meertesdaerf ) is a wine village in the Ruwertal near Trier and a recognized resort . The local community is located in the district of Trier-Saarburg in Rhineland-Palatinate and belongs to the Verbandsgemeinde Ruwer , which has its administrative headquarters in Waldrach .

Mertesdorf is about ten kilometers from the center of Trier in the Ruwertal . The old town center developed in a side valley of the Ruwer . This location gives the place a remarkable scenic charm. In the valley, the Ruwer flows through a meadow in which mills are lined up. Vineyards climb on both sides of the valley mouth. Sometimes steeply uphill and surround the village to the north, while the southern slope is bordered by forest. In the west, the wooded Grüneberg rises as a landmark of the lower Ruwertal .

The annual precipitation is 760 mm. The precipitation is in the middle third of the values ​​recorded in Germany. Lower values ​​are registered at 54% of the measuring stations of the German Weather Service . The driest month is April, with the most rainfall in November. In November there is 1.4 times more rainfall than in April. Precipitation varies only minimally and is extremely evenly distributed over the year. Lower seasonal fluctuations are recorded at only 1% of the measuring stations .

The history of the village goes back to Roman times . The Roman road from Trier to Mainz led through this side valley to the Hunsrück heights . Roman remains, a Roman cemetery near today's state road 151 (former federal road 52 ), the proven Roman stone mill in the valley and evidence of Roman viticulture on the Grüneberg testify to almost 2000 years of history. The area around the place found its way into literature as early as Roman times. In the 483 verse poem Mosella , the poet Ausonius described the Moselle and its tributaries. He mentions a special technical feature of Ruwer: the marble saws that cut blocks of marble into marble slabs. These were used as floor coverings and wall cladding in the large buildings of the imperial city of Trier. During excavations at the Karlsmühle in the middle of the last century, fragments were found which suggest a Roman stone mill.

Mertesdorf was first mentioned in a document in 893. Another document from 966 already shows the existence of a village chapel. In the Middle Ages, Mertesdorf belonged to the St. Maximin Abbey in Trier for over 1000 years , one of the richest monasteries, which was only dissolved by Napoleon's troops in 1801 . The church, built in the years 1855-1856, was replaced in 1976 by a new building.

Mertesdorf was persecuted by witches from 1587 to 1629 . At least 30 people (20 women and 10 men) got into a witch trial , 29 cases ended in death. Maria Vetter , wife of Theis Vetter, had to admit under torture like six other defendants that she wanted to magically kill the abbot of St. Maximin . Her husband was executed with her. She was burned on June 7th, 1594.

There is a community partnership with the French community of Saint-Just-la-Pendue ( Loire department ).

Mertesdorf has a large sports center (Ruwertalhalle) and a heated outdoor pool , restaurants and a number of hiking trails. Above Mertesdorf, on the other side of the national road 151 , is the Mertesdorf central landfill and the Bundeswehr Technical Service Center 41 is located on the Grüneberg .

At Mertesdorf-Grünhaus, the state road 149 runs through the Ruwertal, which was once a connection between Ruwer and Türkismühle / Nahe as federal road 52 . At Grünhaus there was also a stop of the former Hochwaldbahn (Trier – Hermeskeil), on whose route the Ruwer-Hochwald-Radweg runs today .

In Mertesdorf, the oldest wine-growing community in the Ruwertal alongside Kasel and Waldrach , 65 hectares of vineyards are cultivated. Due to the success of some wineries, Mertesdorf was able to increase its popularity in recent years. In the wine literature, the Mertesdorf Riesling wine was awarded a top position. The English wine critic Stuart Pigott wrote : “The wineries in Mertesdorf are among the most outstanding in the entire Mosel-Saar-Ruwer region and must be counted among the best Riesling producers in Germany. Mertesdorf Riesling wines are characterized by delicate, finesse-rich and piquant fruit and a beautiful, varied bouquet. "

Among the villages Mertes wineries include the winery Maximin Green House , the estate heirs of Beulwitz or Weingut Karlsmühle .

Local parishes of the Verbandsgemeinde Ruwer in the Trier-Saarburg district