This article describes the Newel Ward . For the city of the same name in Russia see Newel (Pskow) . 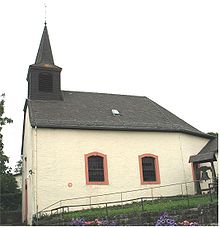 Newel is a municipality in the Trier-Saarburg district in Rhineland-Palatinate . It belongs to the Trier-Land community .

Newel is located near the federal highway 51 and on the old Roman road Trier-Neuss . Districts are:

The annual precipitation is 837 mm. The precipitation is in the upper third of the values ​​recorded in Germany. Lower values ​​are registered at 70% of the measuring stations of the German Weather Service . The driest month is April, with the most rainfall in November. In November there is 1.5 times more rainfall than in April. Precipitation varies only minimally and is extremely evenly distributed over the year. Lower seasonal fluctuations are recorded at only 1% of the measuring stations .

In 634 Newel, as well as the places Welschbillig , Sülm and Röhl with their churches and affiliations, were given by King Dagobert I (622 to 638) to the Church of St. Paulinus ( Paulinstift Trier ). At that time Modoald was Bishop of Trier.

In 981 this donation is mentioned in a document from Archbishop Egbert von Trier (977–993). Newel is mentioned for the first time under the name Nuvela in the document mentioned .

The current community was formed on March 16, 1974 from the dissolved communities Besslich, Butzweiler, Lorich and Newel.

The development of the population of Newel in relation to today's municipal area; the values ​​from 1871 to 1987 are based on censuses:

The local council in Newel consists of 20 council members, who were elected in the local elections on May 26, 2019 in a personalized proportional representation, and the honorary local mayor as chairman.

Blazon : In the obliquely quartered coat of arms there is a red-armored, torn-off black eagle head in gold and opposite this a red continuous cross in silver . In the front in red there is a crossed black hammer and mallet with gold handles and in the back in red is a silver plow knife.