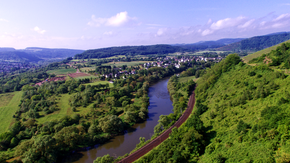 The wine town of Kanzem , at least until September 1, 1936, written as Canzem , is located on the lower Saar in Rhineland-Palatinate . He is a local church within the Verbandsgemeinde Konz in the district of Trier-Saarburg .

Kanzem is on the Saar line , but the Kanzem stop is on the other side of the Saar.

In the course of the expansion of the Saar into a large shipping route in the 1980s, the location of Kanzem became an island, surrounded by the Saar and the lock canal (see picture of the town entrance).

The Kanzem lock is located between Kanzem and Wawern at the northern end of a lock canal that was dredged in the 1980s as part of the expansion of the Saar into a major shipping route in a former course of the Saar.

Kanzem is first mentioned in 1030 in a document from the St. Marien Abbey in Trier under the name Camesa as a branch of the mother church in Wiltingen. The place name goes back to pre-Roman times and indicates an early settlement. Since the 12th century Kanzem had in common with the neighboring community Wiltingen own rule that an enclave in the Electorate of Trier to Duchy of Luxembourg , occupied belonged to the entire region in 1794 by France and by the Treaty of Campo Formio was connected in 1797 to France. By resolution of the Congress of Vienna in 1815, Kanzem became part of the Prussian Rhine Province .

On July 18, 1946, Kanzem, together with 80 other municipalities in the districts of Trier and Saarburg , was annexed to the Saar area , which was separated from the rest of the French occupation zone in February 1946 and which was no longer subject to the Allied Control Council at the time . On June 6, 1947 this territorial outsourcing was withdrawn to 21 municipalities, so that Kanzem came to the 1946 newly formed state of Rhineland-Palatinate .

The local council in Kanzem consists of twelve council members, who in the local elections on May 26, 2019 in a majority vote were elected, and the honorary mayor as chairman. Until 2009, the council members were elected in a personalized proportional representation.

Other vineyards that are also cultivated by Kanzem winemakers:

Our village should become more beautiful - our village has a future

Kanzem has been taking part in village competitions regularly since 1977 with the following results:

Encouraged by the successes of 1999, the local community of Kanzem applied in 2000 to represent the State of Rhineland-Palatinate to participate in the European village renewal competition . The motto was “No future, no past”. The evaluation criteria particularly required a holistic approach to village renewal. The result was a 2nd prize with the award "Holistic, sustainable and motto-based village development of outstanding quality", which was presented to representatives of the local community by the international jury on October 13, 2000.

The special garden of a philosophical garden was planned, donated and executed by the citizens of Kanzem from 2001 onwards. The public complex, completed in 2004, with its four sub-gardens, Becoming , Being , Farewell and Paradise is intended to encourage reflection on life and its transience.

The ecological nature trail " Nature trail on the old arm of the Saar " deals with the historical and ecological aspects of the subject areas "The Village", "The River", "The Forest" and "The Gravel Pits".

A significant part of the Wiltinger Saarbogen nature reserve is located in the municipal area of ​​Kanzem.

In 2007 a vinotheque was opened in Kanzem , in which the leading Kanzems wineries as well as a "guest winemaker of the month" participate.

There are three crossroads in the local area . One of them is on the banks of the Saar and is popularly known as the Halfenkreuz . The two meter high cross made of light sandstone was built around 1700. According to tradition, a ship from the Saar sank at this point.