The old world mice (Murinae) are a subfamily of the long-tailed mice (Muridae). This group includes around 600 species, the best-known genera are the mice ( Mus ) and the rats ( Rattus ). 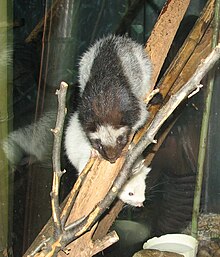 The giant bark rats are the largest old world mice 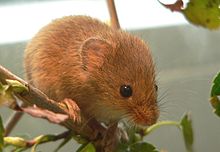 The harvest mouse is one of the smallest species

The striped grass mice are characterized by their striped fur 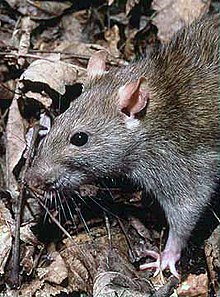 The lamellar tooth rats were previously managed as a separate subfamily, but are now recognized as part of the old world mice

The house mouse is common worldwide

The auricles of Old World mice are usually noticeable. Their tail is shorter than, as long as, or longer than the length of the head and torso. In monkey foot rats, the rear third of the tail above (dorsally) is designed as a grasping tail that can carry the body weight. In harvest mice , pogonomelomys , prey- tail rats and surgeons , only the tip of the tail is dorsally designed as a prehensile tail and is unable to carry the body weight. The tail scales of most forms are arranged in overlapping rows, but in some forms they do not overlap but rather form tessellated patterns (for example, tessellated rats ).

The forefoot of the old world mice has a stubby thumb with a nail and four other toes with claws . In some forms, the fifth toe is reduced to a stub so that the forefoot appears to have only three toes (for example furrow-tooth brook rats ).

The rear foot mostly reflects the adaptation to an ongoing lifestyle. In some forms, he is short and broad (for example Gray Tree Rat ), with many other long and narrow (for example, African long-eared mouse and African wading rat ), with few large and webbed provided (hydromys and Earless Water Rat). It has five toes, of which the first and fifth are greatly reduced and the middle three are elongated in some soil-dwelling forms ( Asian soft rats and furrow-tooth brook rats). Usually all toes of the hind foot have claws. Exceptions are the long-tailed climbing mice (with flat nails on the first and fifth toes), the brush-tailed tree mice, the Asian climbing rats and the Fea tree rat (with a flat nail on the first toe), the Sody tree rat (with a convex nail with a blunt edge on the first toe), the Luzon wide-tooth rat (with a pointed nail on the first toe) and the monkey foot rat (with a nail-like claw on the first toe). In some arboreal forms, the first and fifth toes are semi- opposable (brush-tailed tree mice, long-tailed climbing mice and Asian climbing rats).

The soles of the front and rear feet are bare. The hind feet usually have six soles , which in some forms are small and reduced in number ( Rajah rats and Asiatic soft rats ), whereas in arboreal forms they can be large and deeply grooved (e.g. brush-tailed tree mice and Margareta rats ) .

The fur of the Old World mice is silky, dense and woolly, velvety, coarse and thin on the head and trunk, mixed with spiky hair or dense and spiky (Sulawesi spiny rats, Ryukyu spiny rats and a type of Margareta rats). On top it is brown, yellow-brown or grayish to blackish. Some forms have a distinctive eel line ( striped mice and some types of furrow-toothed brook rats, wood mice and striped grass mice ) or several lines with different colors ( Luzon striped rats , African striped grass mice and most species of striped grass mice ). Apart from that, a pattern on the top is rare. The red-nosed rats have a rust-red nose and a rust-red rump and some forms of the Old World mice have ocher-colored flank lines. Tufts in front of or behind the eyes are rare. They occur in young animals and nestlings (Sody tree rats), but not in adults. The fur below is white, yellow-brown or grayish. It usually contrasts strikingly with the fur on the top, but it can also be the same color as the top.

The auricles of the old world mice are thin to thickly hairy. The tail appears bare in most forms, but in some it is densely hairy ( e.g. Luzon tree rats, gray tree rats and Margareta rats), bushy like croissants (a type of bark climber) or moderately hairy with a tassel (tree forms like e.g. brush-tail tree mice). It is usually monochrome, but can also be faint or noticeably two-colored (for example white-bellied rats and Rajah rats). The front third or the front half can be dark and the rest white (gray tree rat and many other Indo-Australian forms) or the tail is monochrome except for a white tip (for example prey-tail rats).

As in all rodents, the two incisors of the old world mice are transformed into incisor teeth , behind which there is a gap called a diastema . Canines and premolars are always absent, and they have no more than three molars per half of the jaw, but sometimes only one or two.

The natural range of the old world mice includes Eurasia , Africa and Australia . This makes them the only land-bound higher mammals that were native to Australia and New Guinea before human colonization. They even settled these countries in two radiations, on the one hand the rats and on the other hand the hydromyini . The greatest biodiversity can be found in the tropical regions of Africa, Southeast Asia and New Guinea.

There are naturally no Old World mice on the American double continent - they are represented there by the New World mice . Three species, the house mouse , the house rat and the brown rat have meanwhile achieved worldwide distribution in the wake of humans. Some other species following culture have also been able to expand their habitat.

Old world mice inhabit a wide variety of habitats, they can be found in forests as well as in savannas and grasslands, in mountainous regions and in dry areas.

There is also great diversity in terms of lifestyle. In addition to soil dwellers, there are also tree-dwelling species, as well as diurnal and nocturnal species and, in addition to solitary species, species that live in large groups.

Diet also varies, but many species are predominantly herbivores that feed on grasses, seeds, tubers, and other vegetable matter. Some species also or almost exclusively eat insects and other small animals or even small vertebrates.

The reproduction of old world mice is generally characterized by high fertility, a short gestation period and a low life expectancy.

The old world mice comprise almost 600 species in around 130 genera. Due to the large number of taxa, the internal system is still largely unclear.