Marines Nekton : Atlantic herrings ( Clupea harengus ) on their spawning migration in the Baltic Sea . The high speed can be maintained for several thousand kilometers 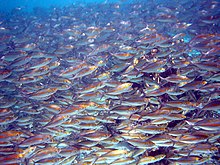 A schooling fish is a fish that swims around with many other fish of its kind, but also with other species. The individual fish swim largely parallel to each other, at approximately the same distance and in the same direction. Schooling fish can form such a school year-round, seasonally or only on occasion. Swarming behavior is also known from birds , cuttlefish , krill and many other animals. Corresponding formations of mammals are called herds .

In a flowing transition one can distinguish those animals from schooling fish that only live together in groups (schools).

Real schooling fish are characterized by a constant individual distance , disorientation of isolated animals, coordinated movement of the entire school, communication between the individuals in the school and mostly lifelong orientation in the school. As a rule, animals of the same species and of the same age swim in a school.

The real schooling fish include herring , for example , but also other fish species from the open seas. Real schooling fish are seldom found in fresh water. Examples are shark barbs , red-headed tetra or the oblique swimmers of the genus Thayeria , which still predominantly meet the criteria for a real schooling fish. Basically, these are animal species that live under high enemy pressure. The species have characteristics that promote the cohesion of the school; in the case of the freshwater species mentioned, there are certain drawing characteristics.

Loggerhead schooling fish or group fish show tendencies towards schooling in larger groups if there are external threatening factors. Animals of different species and ages can also group together. In smaller groups or in the absence of disruptive factors, the behavior changes, but isolated animals are never disoriented in the room or are under high individual stress.

This group includes many freshwater fish from the order of the tetra and barbel . They meet numerous criteria for schooling fish, but they differ in some important points from real schooling fish. For example, the red neon in species aquariums is more of a slightly territorially organized fish, even in large groups of several hundred animals, the individuals are distributed throughout the available habitat and, above all, the males demarcate small individual territories there, which they defend against conspecifics. Only in the presence of external disruptive factors, such as natural predators, do the animals gather to form a school and then show the criteria for schooling fish.

Further examples of sociable group fish among the freshwater fish are the armored catfish of the genera Aspidoras , Brochis and Corydoras or a number of loaches from the genus Botia . In nature, these animals live together in schools, which can contain several hundred to a thousand individuals. The joint activities primarily include eating, for example, on open, unprotected food grounds (sandbanks), where the school or large group offers the individuals appropriate protection. Otherwise hardly any other criteria for schooling fish apply to these animals.

Schooling is associated with advantages and disadvantages for the fish. It is advantageous that the individual animal in a swarm will be more likely to survive a predator attack. Individual fish can be pursued in a more targeted manner and therefore have a higher risk in the event of a predator attack, unless they can immediately get to safety, for example in a cave or a sea ​​anemone . The shoal's protection from predators results primarily from the fact that a predator can only keep an eye on a limited number of fish and can only eat a limited number of fish. The more fish swim together, the lower the risk for each individual fish in the event of an attack. On the other hand, a school also has disadvantages: large schools could attract more predators than a small school or a single fish. Therefore, the number of attacks, and thus the risk of being eaten by a predator, can increase with the size of the swarm.

The higher the risk that a fish will fall victim to a predator, the more carefully it should be on the lookout for predators and the less time it has to eat. One of the main reasons why animals flock is likely that "many eyes see better" and that in the flock each individual spends less time looking for predators and thus each animal has more time to eat.

The distribution of the food in the room is also decisive for the question of whether a fish species lives in a school. If the food of a certain fish species is widely distributed in small portions, then this fish species cannot use this food economically if it swims around in a school. No member of the swarm would then find enough to eat. If, on the other hand, the food is distributed in large portions in the room (e.g. swarms of crustaceans) then swarming behavior has hardly any disadvantages for this species of fish, since there is enough for everyone, and the advantages outweigh the disadvantages.

With a coordinated hunting strategy, schools of fish can be very dangerous for schools of smaller fish. This can be observed well in schools of barracuda, mackerel or perch, for example. Another advantage of the swarm is that the probability of finding a sexual partner for reproduction is higher in the swarm than with a solitary lifestyle.

With many fish - including popular aquarium fish , such as the tetra species of the genera Hyphessobrycon , Hemigrammus and Paracheirodon , swarming behavior can be observed all year round or at certain times. During courtship and the mating season, however, typical schooling fish also delimit smaller areas that they defend against each other. The swarm, on the other hand, merges when predators appear. Schooling fish that are isolated often suffer from severe stress, they appear frightened and in extreme cases soon die.

A shoal of 259 small fish of the species Erismatopterus levatus is in the Fukui Prefectural Dinosaur Museum in Katsuyama . It is around 50 million years old and comes from the USA (limestone of the Green River Formation from the Eocene ). Their importance as evidence of the existence of schools of fish was only recognized in 2019 (Nobuaki Mizumoto, Arizona State University).