A depression in the sense of geology is a tectonically caused depression on the mainland that is lower than sea ​​level . 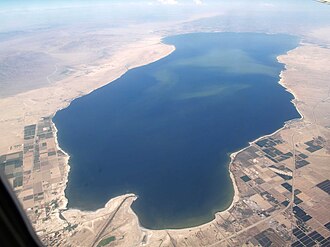 The so-called Salton Trough in California is a geological depression. A tectonically active expansion basin that extends to approx. 84 m below sea level, with the Salton Sea , a 980 km 2 salt lake at its deepest point.

Depression is a special case of a depression , the bottom of which is always lower than the entire environment, but can also be higher than the level of the ocean. Geomorphological as well as other geographic depressions are to be differentiated from lowlands that are only partially surrounded by higher terrain, so that their bottom is predominantly above the discharge horizon. Only in climatic regions where the amount of precipitation is less than the evaporation can depression be superficially recognizable as naturally accessible land below sea level. At the deepest point they have a salt marsh or salt lake , the water level of which is often subject to strong seasonal fluctuations.

On the other hand, if the bottom of a lake is deeper than sea level, this is called cryptodepression , i.e. hidden depression. Depressions that can be walked on in humid climatic regions are only possible through human intervention. In terms of area, the most significant area is permanently drained marshland located just below mean sea level, and damming depressions such as the Dutch polders . The deepest depressions in humid regions are opencast mines that are either currently being exploited and drained, or have not yet been completely backfilled or watered after they were abandoned.

A water-filled depression (lake), the bottom of which is below sea level, but which is so filled with water that the lake level is above sea level, is called cryptodepression (cf. Greek kryptos for "hidden"). In a humid climate, hollow forms are filled with lakes until they overflow. Therefore, apart from artificial drainage, there is only cryptodepression here. These emerged particularly often as a result of Ice Age glaciation, such as around the Baltic Sea and the peripheral lakes of the high mountains . In fjord lakes of this kind , glaciers have carved out valleys to below sea level. Terminal moraines or rock bars or hundreds of kilometers of land mass keep the lake level high and sea water away.

On shallow seashores and in some estuaries, land that is little below sea level is artificially kept free of sea water and used as cultivated land through the dike and constant drainage - this is called the damming depression. More than a quarter of the Netherlands is lower than mean sea ​​level . The deepest damming depression in Germany at 3.54  m below sea level is located in Neuendorf-Sachsenbande in the Steinburg district .