Preserved imprints of victims of the volcanic eruption

When Vesuvius erupts , the Roman cities of Pompeii , Herculaneum , Oplontis and Stabiae are destroyed by a pyroclastic current . With two letters from the Roman writer Pliny the Younger , whose uncle Pliny the Elder was killed in the volcanic eruption , it is the first natural disaster to be documented in detail . In the two letters to the historian Tacitus , Pliny describes numerous details of the eruption: the rise of the eruption column, the precipitation of ash and pumice stones, tremors and the retreat of the sea level. This type of explosive volcanic eruption is now known as the Plinian eruption for this reason . The report allows an exact dating to the year 79, but the date of August 24th derived from it is controversial: Coin analyzes and finds of autumn fruits such as pomegranates, chestnuts, nuts and olives, as well as closed wine containers near Boscoreale, in which must is stored, also leave the Interpretation that the eruption did not occur until autumn. 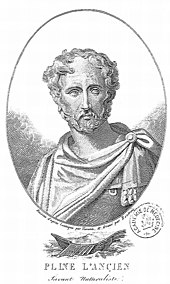