The following important information is missing from this article or section:
Main purpose - see discussion
Help Wikipedia by researching and pasting it .

Kulturhaus in Berlin-Treptow with the company's logo above the entrance

The Society for German-Soviet Friendship (DSF) was a mass organization in the GDR that was supposed to impart knowledge about the culture and society of the Soviet Union to the citizens .

Political function as a mass organization in the GDR

The DSF should convey the self-understood truth about the Soviet Union to the broad masses in order to reduce anti-Soviet attitudes in the population. For this purpose, members were recruited intensively, later at the schools.

The trend of comprehensive recruitment continued even after the end of the Cold War during the detente policy and the policy of Peaceful Coexistence continued. Now the DSF was supposed to promote friendship and cooperation between the GDR and the USSR, spread knowledge about the Soviet Union and instill socialist and communist behavior. The membership increased from 3.5 million in 1970 to 6.4 million in 1988.

This resulted from the pressure to join it. Those who did not want to become a member had to justify this. A refusal to join was questioned by party and trade union officials as well as state leaders, but did not automatically lead to problems for the GDR citizen concerned. Membership in the DSF was intended to express solidarity with the socialist system and the “first socialist state” and was demanded by various means. For example, it was a basic condition that the workers, peasants and employees in the brigades were also members of the DSF, otherwise their brigade had little chance of being recognized as a collective of socialist work in socialist competition .

The DSF was divided into basic units, district and district organizations as well as a central board with president and general secretary elected every five years by a congress. The central board had its seat in Berlin-Mitte in the central house of the DSF , in the Palais am Festungsgraben (house on the chestnut forest) until 1981 . After that he was at Mohrenstrasse 63. A member of the central board from 1978 to 1989 a. a. Karl-Eduard von Schnitzler . There was a DSF house in every district town .

From 1947 to 1964, DSF had its own book and magazine publisher, Kultur und Progress Verlag , which published translations of Soviet literature. He also edited the journal Soviet Science and, among other things, the newspapers of the Soviet Union and the Free World .

Badge of honor collective of the DSF - with 5 defense 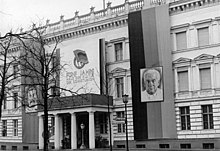 Berlin building of the central board of DSF as the House of Culture of the Soviet Union , 1952 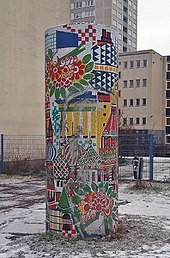 DSF emerged on July 2, 1949 from the Society for the Study of Culture of the Soviet Union , which was founded on June 30, 1947 and was the second largest mass organization in the GDR with around 6 million members (1985) after the FDGB . As numerically and politically the most important friendship society, it was a member of the League for Friendship of Nations of the GDR.

Sections in the Federal Republic of Germany and West Berlin

In the Federal Republic of Germany , too, a West German organization was founded in September 1950 at the inaugural 1st Congress in Homberg . It was only banned in individual federal states.

In West Berlin , DSF was the German-Soviet friendship society until 1990, an association based on Allied law. Until its partial integration into the all-German DSF, which was created in 1990, it operated the Mayakovsky gallery on Kurfürstendamm .

In addition to the political aspects (especially agitation and propaganda ), the German-Soviet Friendship organized cultural and sporting activities in the cities, communities and schools, which were aimed at getting to know the people and cultures of both countries. In 1970 there were 394,000 events, the total number rose to 1,161,262 in 1988, including, for example:

In fact, many members were just passive and never attended a DSF event. Membership offered GDR citizens the opportunity to demonstrate the sometimes useful “social activity” at a minimum level. On the other hand, elements from work culture and everyday life from the USSR were transferred to life in the GDR via the DSF, where they were partly rejected, but partly modified or taken over directly.

Development in the late 1980s and turning point

At the end of the 1980s, GDR citizens joined the Society for German-Soviet Friendship to support Gorbachev's glasnost and perestroika policies and to give the GDR government a clear rejection. Since this new Soviet policy was openly rejected by the GDR party and state leadership, DSF found itself in an ambiguous situation. In the end, only information was provided, but any statement or discussion about the situation in the GDR was avoided. After the turning point and the peaceful revolution , the Society for German-Soviet Friendship, like most of the mass organizations in the GDR, lost the majority of its mostly only paying members. The silence ordered from above led not a few functionaries of the society at the base and many members to incomprehension and conflicts.

On November 16, 1989, President Erich Mückenberger announced his resignation in a letter to the central board. At a meeting of the Central Board on November 29, 1989, he was followed by the Secretariat, and a ten-member working committee took over provisional leadership. For the first time in the history of the Society for DSF, an extraordinary congress was convened. This took place on January 27, 1990 in Schwerin . The most important results were: the approval of the delegates for the continued existence of the Society for DSF, the will for renewal, a new statute and the election of a significantly reduced central committee with 33 members and an independent chairman. Pastor Cyrill Pech from Berlin-Marzahn became chairman . The “Houses of Friendship” used by the society were returned to the federal states and municipalities, and the number of members fell to 20,000 by November 1991. Despite the resolutions of the extraordinary congress and the activities of the new committees, the process of renewal for society as a whole was extremely cumbersome and contradictory.

After German reunification , it continued to work as a registered association on a federal basis in the new regional associations of Berlin, Brandenburg, Mecklenburg-Western Pomerania, Saxony, Saxony-Anhalt and Thuringia.

An Extraordinary Federal Association Day on March 28, 1992 decided to change the name of the Society for German-Soviet Friendship to "Bridges to the East" - Federation of Societies for International Understanding. V. This was dissolved on December 31, 1992. Part of the assets were transferred to the “West-Eastern Encounters” foundation .

In 2006, according to research by the historian Hubertus Knabe, there were still 48 streets with the name DSF Street in East Germany . In the Antarctic, a group of mountains was named Mountains of German-Soviet Friendship .