In German civil service law , the term office has three different meanings. The following statements apply accordingly to judges . However, the transfer of a judge for a period of time or for life is only possible with written consent, unless the transfer is due to a judge's indictment , the result of disciplinary proceedings , in the course of a change in the court organization or due to an off-duty misconduct by the judge (overriding interest of Administration of justice).

The office in the legal sense of the status is transferred to the official with the appointment . It denotes the abstract service position and defines the salary position (e.g. Ministerialrat ). This corresponds to the rank of soldiers . The offices are specified in the Federal Salary Act (or since the federalism reform in 2006 for state and municipal civil servants by the respective state salary law ). The award of another office in the legal sense with a higher final basic salary and with a different official title is a promotion . It is generally subject to the right of participation of the staff committee . There are top positions for each pay scale , these are the highest-rated positions available; Example: The salary group A 16 is the top office of salary order A (in Germany).

The office in the abstract-functional sense is assigned to the civil servant with the assignment to a certain authority (e.g. Ministerialrat in the Federal Ministry of the Interior ). It therefore changes when you are transferred to another authority. A different abstract, functional office is also transferred in the case of secondment , i.e. a temporary change of agency. In the case of the mere implementation within an authority, however, the office does not change in the abstract-functional sense. Relocations and secondments are subject to codetermination by the staff council (in some cases for minimum periods); in most federal states, transfers are only subject to a change in the place of employment (exception: North Rhine-Westphalia).

The three official terms can also coincide, for example with the President of the Federal Criminal Police Office . 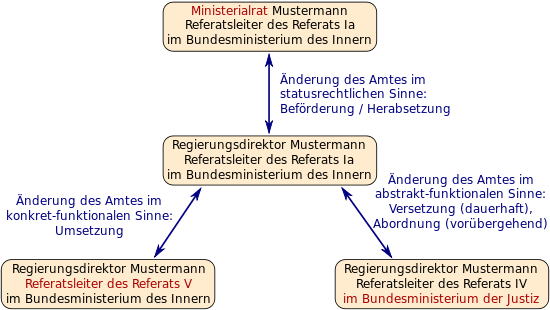