The types of employment relationships in Germany can be broken down into the groups of civil servants , soldiers and judges .

The legal basis for the military service of soldiers is the Soldiers Act .

The German Judges Act applies to professional federal judges . Unless otherwise specified in this law, the provisions for federal civil servants apply accordingly. The provisions of the Civil Service Status Act apply accordingly to the status right of judges in the state service. The federal states make additional regulations by law.

There are different types of civil servant relationship. 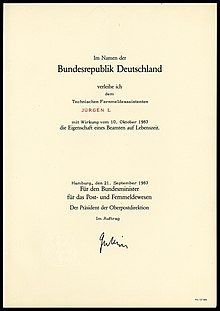 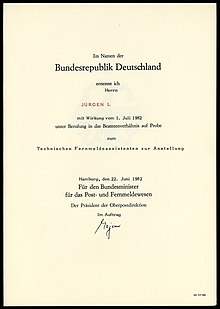 The civil service relationship on probation (BaP) serves to complete a (civil service law) probationary period for later use for life ( Section 6 Paragraph 3 No. 1 BBG in conjunction with Section 28 ff. BLV ; Section 4 Paragraph 3 lit. a BeamtStG ) or to transfer an office with a managerial function ( Section 6 (3) No. 2 in conjunction with Section 24 BBG ; Section 4 (3) lit.b BeamtStG ). A promotion during the probationary period is generally possible.

Officials on probation can be dismissed if they commit an act that would result in at least a reduction in salaries in the civil service for life, if they have not proven themselves during the probationary period or if the structure or the tasks of the employment authority are changed or they are merged with to another authority if the assigned area of ​​responsibility is affected and any other use is not possible ( Section 34 (1) BBG ; Section 23 (3 ) BeamtStG ).

A civil servant on revocation (BaW) usually serves to perform a preparatory service (career training) or less often the (only) temporary performance of sovereign tasks or tasks that may not be assigned exclusively to persons who are in a state to safeguard the state or public life work under private law ( Section 6 (4) BBG ; Section 4 (4 ) BeamtStG ). After successful completion of the preparatory service (career examination), the career qualification for a career in the category of simple , middle , upper or higher service is obtained and the civil servant relationship is usually converted into that of a probationary civil servant. Officials on revocation use a service title instead of an official title . This usually consists of the official title of the entry office for the career path with the addition of candidate (e.g. candidate for a government inspector). In the higher service, the additional trainee lawyer (e.g. technical trainee lawyer) or the service designation Attaché (for the higher external service ) is common.

The certificate of appointment must contain the words “under appeal to the civil servant relationship on revocation” ( Section 10 (2) sentence 2 BBG ; Section 8 (2) no. 1 BeamtStG ). Revoked officials can be dismissed at any time. Dismissal is possible without observing a deadline. With the establishment of a civil service relationship on revocation, no office is conferred at the same time.

The certificate of appointment must contain the words “with an appointment as an honorary civil servant” ( Section 10 (2) sentence 2 BBG ; Section 8 (2) no. 1 BeamtStG ).

A so-called political official does not have a separate employment relationship. He can be put into temporary retirement ( Section 54 BBG ; corresponding state legal regulations).

Civil servants at a religious society under public law are church officials. The regulations of the Civil Service Status Act do not apply to them. Their legal relationship is regulated in the corresponding legal regulations of the respective religious body. For church officials of the Evangelical Church in Germany , the member churches and the member church associations, for example, the Church Officials Act of the EKD applies uniformly .

Military service is a public service and loyalty relationship between the employer, the Federal Republic of Germany, and the soldier, regardless of their rank and whether they are doing military service on the basis of compulsory military service or voluntary obligation ( Section 1 (1) SG ).

Disabled persons who are in a military service relationship that is not for life can enter into a special type of military service that establishes the legal status of a temporary soldier ( Section 6 EinsWVG ).

Anyone who is called to attend an official event in accordance with Section 81 SG (official projects, in particular for military training, further education and training) is in military service. This also applies to the participants in a business event for information purposes .

Participants in an aptitude exercise have the legal status of a temporary soldier and are therefore in military service.

Services according to the fourth section of the Soldiers Act are:

The types of military service in the event of tension and defense according to the Conscription Act are:

Professional judges of the federal and state governments are judges . Legal forms in the judicial service are judges for life, judges for a limited period, judges on probation and judges by commission ( § 8 DRiG ). A judge for life can be appointed who has worked in the judicial service for at least three years after acquiring the qualification for judicial office ( Section 10 (1) DRiG ). Anyone who is later to be used as a judge for life or as a public prosecutor can be appointed as a probationary judge ( Section 12 (1) DRiG ). A civil servant for life or for a limited period of time can be appointed judge by commission if he is later to be used as a judge for life ( Section 14 (1) DRiG ). Appointment as a temporary judge is only permitted under the conditions specified by federal law and only for the tasks specified by federal law ( Section 11 DRiG ). Such a federal regulation applies, for example, to § 18 VwGO . In 2018, the Federal Constitutional Court decided that the appointment of civil servants for life as temporary judges in 2018 was compatible with the Basic Law .

Honorary judges are not employed. You exercise a public office , but a public service and loyalty relationship by appointment is not established.