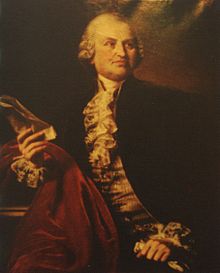 Johann Heinrich Schüle (born December 13, 1720 in Künzelsau , † April 17, 1811 in Augsburg ), after his elevation to the nobility from 1772 Johann Heinrich Edler von Schüle , was a German businessman, inventor, technician, chemist and in the 18th century Calico manufacturer with European significance. In 1771, he was the first entrepreneur in Germany to print copper plates in his manufactory of Kattunstoff . He is considered to be the founder of industrial textile production in this field.

Schüle received his commercial training in Strasbourg and Kaufbeuren . He then worked as a clerk in the cloth trade. In 1745 he moved to Augsburg. He married Catharina Barbara Cristell, the daughter of his employer, and started his own business in the calico trade. The calico printing at that time was a thriving textile industry, which from England and Holland penetrated from. However, it made life more and more difficult for the local weavers , who could not stand up to the fine East Indian calico.

The entrepreneur had his fabrics printed by two calico printers in Augsburg and Hamburg according to precise instructions . Because he applied and developed modern chemical processes, made use of technical innovations and, above all, had a good nose for fashion, his artistically valuable goods were soon in great demand. In the 1740s and 1750s Schüle was well liked by the Augsburg weavers. In 1756 he took 17,369 “pieces” from the guild members, processed them and sold them to Wroclaw .

After he had received a Catholic calico printing concession through a special permit in 1759, Schüle founded his own factory. He was the first to import large quantities of high-quality raw calico from England and East India for further processing on the old continent . The domestic crowds were no longer enough for him. He now had customers in England, France , Russia , Poland , Portugal , Spain , Italy and Holland. The clothing made from the printed fabrics was mainly worn in the courts, in the aristocratic milieu and in the upper class.

Between 1759 and 1764, Schüle's manufacture processed almost 76,000 calico. The calico manufacturer did not care about quantitative import restrictions of his raw materials by the Free Imperial City of Augsburg. He ignored commands, prohibitions and attempts at agreement without any qualms. Quarrel arose immediately with the weavers, who wanted to have the protection of the local handicraft and its woven goods secured. During a factory inspection in 1765, the imported calico that had been hidden in his factory was discovered. In 1766 Schüle was sentenced to a fine of 10,600 guilders . His imported, undeclared goods were confiscated. Annoyed, he turned his back on the Fugger city.

Schüle founded a weaving and textile printing company in Heidenheim an der Brenz . Business did not flourish as it did in Augsburg. A few years later, Johann Gottlieb Meebold from Sulz am Neckar became a partner. At that time, the products manufactured there were called “colorful cattun”. The name rubbed off on the company, the "Württembergische Cattunmanufactur (WCM)".

The year 1768 brought the weavers a defeat in their dispute with the factory owners. In this dispute, the emperor decided against the weavers' guild and in favor of the calico manufacturers led by Schüle.

Schüle went back to Augsburg and had the so-called “Schülesche Kattunfabrik” built in front of the city walls near the Red Gate in 1770/1771. Emperor Joseph II elevated the entrepreneur to hereditary nobility on January 4, 1772. Schüle also received a privilege to produce certain fabric samples. Nobody else could paint the patterns with gold and silver in such a stylish way in his day. So it's no wonder that Schüle received offers to settle in their kingdoms from Maria Theresa , Friedrich II and the King of Württemberg.

In 1792 the father handed the business over to his sons, but returned to management again in 1802. Johann Heinrich Edler von Schüle remained full of energy even in old age. From Augsburg, the imperial council had a factory owner's villa built in Heidenheim in 1808, which was 23 m long and 12 m wide. A magnificent wrought-iron gate was already impressive at the entrance. Until his death three years later, he could only be present in this building a few times. The Württemberg state bought the building for 5,000 guilders in 1836 and housed the Heidenheim tax office there.

After his return from Heidenheim, Schüle had the previous factory demolished and from 1770 onwards a castle-like production facility was built for construction costs of almost half a million guilders. It became the first calico factory in mainland Europe. Before that there were calico manufacturers only in England.

In 1771 it was already generating a turnover of over 3 million guilders, with a raw material input of the equivalent of 805,000 guilders. For comparison: According to his own records, he had a total turnover of 3.75 million guilders in Augsburg from 1745 to 1766.

The “Augsburger Zitz” fabric produced in his factory was in demand worldwide. The business flourished enormously for ten to twelve years. More than 75,000 pieces of calico left the factory. Until around 1785 the company had around 3,500 wage-dependent employees and was at times the largest employer in Augsburg.

But in the middle of the 1780s the calico production had to be cut back. Schüle increasingly suffered from competition from other manufacturers who had caught up with its long-term lead and brought textiles of comparable quality onto the market. His model operation had resulted in the creation of further calico printers in Augsburg, with every second principal having received training in his plant.

In 1792 his sons took over the company, which was fighting for their sales. In 1802 Schüle himself returned to the management because the two sons had not been able to leave the losing zone. The political circumstances after the French Revolution and the Napoleonic Wars led to the breakdown of sales markets in France, Italy, Austria, England and overseas. The Schülesche Kattunfabrik was driven completely into bankruptcy due to a lack of export demand after Schüle's death.

The parent company of the Augsburg textile industry, one of the most beautiful factory buildings in the simplified style of a baroque castle, was used by other textile companies for production until the 1990s. After Nagler & Sohn went bankrupt, it stood empty for a long time and was then acquired by a property developer. Because of alleged dilapidation, the south and north wing of the three-wing complex were demolished despite protests in 1996. The eastern part with the listed facade remained as a ruin. The Free State of Bavaria acquired the site and built a new building on it for the Augsburg University of Applied Sciences while preserving the historical structure. The university management and the faculties for design and computer science have moved into work and teaching rooms in the historical head building and in the newly built glass side wings . A wrought-iron grille, which monumentally closed off the inner courtyard of the calico factory to the west, has also been saved from the time it was built. It is an eye-catcher in the State Textile and Industry Museum in Augsburg.