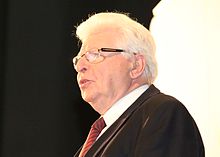 Heinrich Oberreuter (born September 21, 1942 in Breslau ) is a German political scientist . He is the director of the Institute for Journalist Training in Passau . He previously taught as a professor at the University of Passau and was director of the Academy for Political Education in Tutzing from 1993 to 2011 .

Oberreuter studied political science , history , communication science and sociology at the Ludwig Maximilians University in Munich . From 1968 to 1978 he was a research assistant at the Geschwister-Scholl-Institut of the University of Munich, from 1970 he was also a research assistant at the German Bundestag . In 1978 he moved to the Otto Suhr Institute at the Free University of Berlin as a professor, and from 1980 to 2010 he held a chair for political science at the University of Passau. In 1987 Oberreuter was visiting professor at Dartmouth College in Hanover , New Hampshire , USA.

In 1991, Oberreuter was appointed the founding dean for the humanities and social sciences at the Technical University of Dresden by the Saxon Minister of Science . There he was a member of the board of trustees and briefly (2002/03) also director of the Hannah Arendt Institute for Research on Totalitarianism . During his two years of service, he succeeded in constituting the Faculty of Philosophy and the Faculty of Linguistics and Literature. Appointments to the Universities of Eichstätt (Chair of Communication Science), Dresden and Munich followed. On November 1, 1993 he became director of the Academy for Political Education in Tutzing. He was in charge of this facility until October 31, 2011. He is still active as the second chairman of the Academy's support group.

In 2002 Oberreuter was offered a position at the LMU Munich. However, he had not been properly placed on the list of appeals, and the administrative court found a violation of university autonomy. After negotiations, Oberreuter did not accept the call.

Between 2012 and 2017 he was in charge of the eighth new edition of the State Lexicon of the Görres Society, which was last edited in 1985 . The eighth edition comprises almost 2,000 entries in five volumes.

Heinrich Oberreuter has been a member of the CSU for many years . He ran in 1996 on the list of the CSU in the election to the Passau city council.

He was elected chairman of the Diet Commission of the Bavarian State Parliament in the electoral periods from 2003 to 2008 and 2008 to 2013 .

Heinrich Oberreuter is co-editor of the magazine for politics .

He is also a temporary commentator for Bayerischer Rundfunk and a regular author in several daily and weekly newspapers.