The forerunners of public broadcasting in the Netherlands were the programs of the engineer Hanso Idzerda on the PCGG station from The Hague (1919-24), Radio Bloemendaal (from 1924) and the programs of the radio device manufacturer Nederlandsche Seintoestellen Fabriek (NSF) from Hilversum (from 1923), soon in collaboration with the Hilversumsche Draadlooze Omroep (HDO). In 1926 HDO became a foundation, from which the Allgemeine Radio-Vereinigung AVRO emerged in 1927 . It shares airtime with the other radio associations, in particular the Protestant NCRV (founded in 1924), the Catholic KRO (1925) and the VARA of the workers (1925). In 1927 the denominational associations NCRV and KRO got their own transmitter in Huizen ; AVRO and VARA share Hilversum. The airtime resolution of 1930 provides for a time share of 20% for each of the four large associations. In 1935 Nozema took over the operation of the transmission systems (from 1937 it operated its own test transmitter in Jaarsveld ). Also in 1935, the Kootwijk long wave transmitter replaced the Huizen transmitter; In the following, Kootwijk is usually referred to as "Hilversum I", while Hilversum ("Hilversum II") is limited to medium waves. There are also the two shortwave transmitters PCJJ (from 1927 in foreign languages, from Hilversum, from 1937 as PCJ from Huizen) and PHOHI (from 1929 in Dutch for the Dutch East Indies , from Huizen).

During the German attack on the Netherlands in 1940, the retreating Dutch troops destroyed the Hilversum MW transmitter and the shortwave system in Huizen; the studios in Hilversum and the LW transmitter Kootwijk remain intact. While Kootwijk will soon be used as the German European broadcaster "Friesland" (together with " Bremen ") with foreign languages ​​for propaganda purposes, the MW broadcaster Lopik , which has been under construction since 1938 and is now completed, broadcasts Dutch programs under the supervision of a German broadcasting service center (RBS), from 1941 as the newly organized Nederlandsche Omroep (NO). The shortwave transmitter PCJ in Huizen is restored by the German occupation forces; there is also a shortwave transmitter PCV in Kootwijk. Due to the confiscation of radio sets in May 1943, wire radio became more important for domestic supply .

The Dutch government-in-exile in London operated Radio Oranje from 1940–45 through BBC radio stations and from 1944–46 through the Dutch military authority in the liberated Eindhoven Radio Herrijzend Nederland . The plan to replace this and the old broadcasting associations with a single national broadcaster (Stiftung Radio Nederland in den Overgangstijd , RNIO) failed in 1947. Instead, the previous associations merged to form the Dutch Radio Union ( Nederlandse Radio Unie , NRU) , which now also operates regional broadcasters; only the international service is transferred separately to the Radio Nederland Wereldomroep (RNW) foundation . 1951 start the broadcasting associations with television broadcasts ( Nederlandse Televisie Stichting , NTS); In 1969, NRU and NTS merge to form the Netherlands Broadcasting Foundation ( Nederlandse Omroep Stichting , NOS), which is responsible for coordination and technology. The new national programs are Nederland 2 (1964) and Nederland 3 (1988) on television , Hilversum 3 (1965), Hilversum 4 (1975) and Hilversum 5 (1983) on radio . New AM broadcasting systems are the medium-wave transmitter Flevoland (1980) and the short-wave transmitter Flevo (1985).

In 1995 the Dutch Program Foundation ( Nederlandse Programma Stichting , NPS) with cultural, informative, minority and youth programs is split off from the NOS; In 2010 NPS was merged into NTR . In 1997 the public broadcasting archive was added to the Institute for Image and Sound . In 2000 the license fee is abolished. In 2002 the Publieke Omroep was created as a new umbrella organization with management tasks, while the NOS remained as a supplier especially for news. In 2007 the Publieke Omroep was renamed NPO ( Nederlandse Publieke Omroep ). In 2008, the new media law comes into force, the second main part of which contains provisions for nationwide services (NPO, broadcasting associations, NOS, NTR), regional and local services and Wereldomroep.

Since the 2000s, Dutch public broadcasting has undergone several reforms, as the eligibility of public broadcasting in the Netherlands for the future has been regularly questioned. On August 19, 2014, all radio and television stations of the NPO got the addition NPO in their name. Previously, the broadcasters presented themselves very inconsistently. These renaming took place for reasons of recognizability, uniformity and the clear allocation to public broadcasting.

As of December 31, 2015, the 2.42 omroepes were canceled. The denominational public broadcasters ( 2.42-Omroepen ) were organizations without members. Its existence was regulated by Article 2.42 of the Dutch Media Act, which is where the name came about. Since 2016 these have been participating within the broadcasting associations. 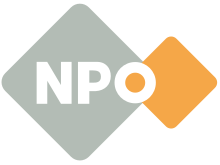 The structure of the Dutch public service broadcaster is unique in comparison to other countries.

Similar to Erste Deutsche Fernsehen , the stations are supplied by various broadcasting companies. The Publieke Omroep does not produce itself, but rather broadcasts the programs of the broadcasting companies. In contrast to the German broadcasters, these are not regional broadcasters, but companies that represent a certain population group and have a certain basic tendency. They are often set in the legal form of an association or a foundation. For example, some stations represent religious communities, others, for example, represent union goals.

The main broadcasting companies are all associations with members who pay a membership fee. How much money an individual broadcasting company receives from the Dutch state and from the entire advertising income of Publieke Omroep depends on the number of members.

There are also foundations for the supporting program with an information or educational mandate: NOS and NTR. This commissioned broadcaster (Taakomroep) has no members and its tasks are defined by law. While the NOS has the legal mandate to provide news, sports, event coverage and general information, the NTR focuses on information, education and culture. During these broadcast times, Socutera (Stichting ter bevordering van Sociale en Culturele doeleinden door Televisie en Radio) and PP (Zendtijd voor Politieke Partijen) broadcast their programs.