The Rai - Radiotelevisione italiana SpA (mostly just Rai , formerly RAI ) is Italy's public broadcaster . It is a radio and television company . The acronym originally stood for Radio Audizioni Italiane , but was retained when it was renamed in 1954.

In August 1924 the SA Radiofono of the Marconi Company and the Società Italiana Radio Audizioni Circolari (SIRAC) of the RCA merged to form the Unione Radiofonica Italiana (URI) . On October 6, 1924, the first URI broadcast from Rome, which received sole broadcasting rights. The Milan station followed in 1925, and the Naples station in 1926.

In November 1927, the URI was replaced by the Ente Italiano per le Audizioni Radiofoniche (EIAR) , whose shareholders included General Electric , Società Idroelettrica Piemontese (SIP) and Fiat . New stations emerged in Bolzano, Genoa, Turin, Palermo, Trieste, Florence and Bari. In 1930 the Prato Smeraldo shortwave station was opened. In 1933 a second transmitter network began to operate (Milan II and Turin II). From around 1935 there was a foreign language service, including news in German (discontinued in 2007). In 1935 responsibility for the radio programs was transferred to the Ministry of Press and Propaganda . In 1937 a third radio program and the experimental television station Monte Mario started .

In February 1945 the renaming of the EIAR in Radio Audizioni Italia (RAI) became effective. After the start of regular television on January 3, 1954, the name was changed to Radiotelevisione Italiana on April 10 of the same year . Two years later, the television signals reached the entire Italian state territory. However, due to the high purchase costs for a television set, there were only a few participants at that time (360,000). In 1961 and 1979 the second and third RAI television programs followed.

In 1976 the Constitutional Court lifted the RAI's monopoly in favor of local private broadcasters. In the following years there was a lack of legal regulations, so that de facto several national private television programs could be established.

As part of a restructuring of the Rai, Rai Uno was renamed Rai 1, Rai Due to Rai 2, Rai Tre to Rai 3, Rai Sport to Rai Sport 1 and Rai Sport Più to Rai Sport 2 on May 18, 2010. Two new channels were also introduced: Rai 5 and Rai Storia . The logos of the television programs have also been changed.

In 2018 it was announced that Rai was participating in the European Alliance co-production group together with the German broadcaster ZDF and the French broadcaster France Télévisions .

The Rai is organized as a state stock company. At the top is the Board of Directors ( Consiglio di Amministrazione , Board of Directors ) with a chairman. Some areas are directly assigned to the CEO ( Amministratore Delegato ), including reporting from the Presidential Palace (Rai Quirinale) and the Vatican (Rai Vaticano).

The administrative area ( Direzione Generale Corporate ) is divided into finance, technical infrastructure and real estate including regional and foreign offices ( Sedi Regionali ed Estere ) as well as other areas such as personnel administration ( Risorse Umane ) and the radio archive ( Rai Teche ).

The program area is divided into four areas:

The subsidiaries of the Rai include u. a. Rai Cinema , Rai Com (marketing), Rai Pubblicità (advertising concessionaire) and Rai Way (broadcast network).

In Bolzano there are two other independent departments in addition to the Italian-language editorial team: Rai Südtirol produces German-language radio and television programs (such as the Tagesschau ) for South Tyrol , Rai Ladinia does the same in Ladin for Ladinia . The programs of Rai Südtirol and Rai Ladinia are broadcast on a common television and radio channel. There is a Slovenian editorial office in Trieste and a French one in the Aosta Valley

Overview of the programs

The annual budget of around 2.5 billion euros is mainly financed by license fees and advertising income. The fee regulation dates from 1938. Since a legal reform, the fees have been collected together with the electricity bill since 2016. As a result of this change in procedure, the fee volume could be increased significantly (by 500 million euros to 2.1 billion euros), although the fee due per household was simultaneously reduced from 113.50 to 100.00 euros per year. Previously, according to estimates, around 30 percent of Italians had not met their obligation to pay. In 2017, the statutory fee fell again to 90 euros. 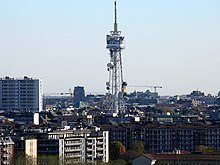 Controversy with the Berlusconi government

The then President of the RAI, Lucia Annunziata , resigned from her position on May 4, 2004. The journalist, who is close to opposition circles, protested against the “all-powerful influence” of the Berlusconi government on the RAI. She resigned after the television broadcaster's supervisory board had proposed several government-related managers to run RAI's subsidiaries.