Wadersloh is a municipality in the south-eastern part of the Warendorf district in North Rhine-Westphalia . The municipality of Wadersloh consists of the three villages Wadersloh, Diestedde and Liesborn .

The south-eastern municipal boundary is the Lippe and the eastern municipal boundary is its tributary Glenne . The main body of water in the municipality is the Liese , which is called Liese in the district of Diestedde Liesebach and Mühlenbach , in the district of Wadersloh Rottbach and in the district of Liesborn Liese and flows into the Glenne. Tributaries to the Liesebach (or Mühlenbach, Rottbach, Liese) are Maybach, Oenkhausgraben, Boxelbach, Halsterbirke, Biesterbach with Biestergraben and Krähenbach and Bergwiesenbach with Merschbach and Risselbach. Other streams are Baagebach , Kleybach and Landgraben . The rivers and streams mentioned all belong to the catchment area of the Rhine . The northern boundary of the municipality is formed by the Fortbach , which is part of the Ems catchment area .

Wadersloh was first mentioned in a document in 1187. Wadersloh as a parish with its farmers is much older. One can probably assume that the Wadersloh farmers and the location of the church go back to the Saxon-Franconian period (9th century). Until well into the Middle Ages, the Münsterland was a large wooded area with many small settlement islands. Usually there were a few courtyards that were within sight of each other. The main courtyard usually gave its name to such a settlement. Between these farm groups and their arable land lay the forest - this woodland is also behind the name ending -lo or -loe, which can also be found in many of the names of this area, including in the name Wadersloh.

The names Bozo and Bardo are considered to be the founders of the noble women's monastery and later Liesborn monastery . There is some evidence that they owned a main farm opposite the Stromberg, which gave the name of Bardesloe to a farming community. This name (by sound shift) Wardesloe must also have played a role in the founding of the church, because the church was called from the beginning (in writing) to Warsloe (1193), Wadersloe (1217), Wardesloe (1498). Wadersloh must have been a church village from the beginning, with the church as the center, from which the streets and church paths ran radially into the farmers.

The people were artisans and traders, who usually also ran a small farm themselves. When it slowly got warmer in the 11th and 12th centuries ( optimum climate ), the harvests were better and the population increased considerably; The inventions in agriculture also contributed to this. Cities (like Lippstadt) were founded and the church villages grew.

At the end of the 12th century, the administration of the Münster diocese was reorganized . Bishop Hermann II von Katzenelnbogen reorganized the parishes and made Wadersloh subordinate to the Archdeaconate of the Provost of St.Martini in Münster . A stone church was also built at this time.

The climatic optimum was followed in the 14th century by a “little ice age”, the harvests deteriorated and the plague decimated the population and struck villages and towns again and again in the following centuries. Many farms fell into disrepair and poverty and hunger spread. Feuds and wars did the rest. The border location of Wadersloh was a great disadvantage, troops passing through took what they could get, plundered and pillaged. At the beginning of the 19th century, large parts of the Münsterland were a poor house.

This situation improved with industrialization and the emergence of urban agglomerations. With the railway connection in 1898, the workplaces in Beckum and Lippstadt were also accessible. Until 1945, however, Wadersloh remained an agricultural village.

On April 1, 1898, the Benteler community was reorganized from Wadersloh.

Today's municipality Wadersloh was formed on January 1, 1975 from the formerly independent municipalities Wadersloh, Liesborn (without the municipality part Bad Waldliesborn ) and Diestedde . Before that, they belonged to the Wadersloh office , which was dissolved in 1975 .

In 1972 the archive of the former Wadersloh office was transferred to the Warendorf district central archive . It is there to this day.

Since the local elections on May 25, 2014, the municipal council has been composed as follows (change from 2009):

In August 2009, Christian Thegelkamp was elected as the new mayor by a narrow margin, and he prevailed against incumbent Theo Westhagemann. Thegelkamp was re-elected in May 2014. 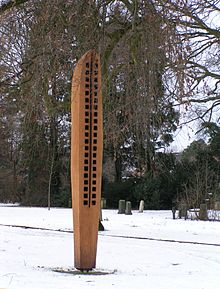 In the village there is the listed parish church of St. Margareta in Wadersloh as well as the Liesborn Abbey in Liesborn and the Crassenstein Castle in Diestedde.

The red Gloria fire extinguishers are a globally known product from Wadersloh. The Gloria GmbH , headquartered in the capital Wadersloh is the largest manufacturer of fire extinguishers in Europe. Gödde-Beton-Liesborn (GBL) and Laukötter Druckguss as well as Westag & Getalit AG, which operates its largest second plant in Wadersloh with its headquarters in Rheda-Wiedenbrück.

From March 2010 to June 2015 young people from Wadersloh designed the Internet radio Radio Wadersloh . In the project, young people should be introduced to media work. The program was broadcast live from the own self-drive studio at certain times . When no live broadcast was broadcast, tape music was played. The former moderators and project managers Jonas Becker and Marco Zaremba are now working in the professional radio business.

Cities and communities in the Warendorf district