The Merino sheep ( Merino for short ) is a fine wool sheep breed that originally came from North Africa . Merino sheep came to Spain in the High Middle Ages , where they achieved great economic importance because of their coveted wool . It was not until the 19th century that other countries also saw large merino herds; today, Australia is the main supplier of merino wool.

The animals are shorn to the skin and give between two and four kilograms of wool (washed) per year. Up to ten kilograms of merino wool can be obtained from top animals.

Origin and breeding in Spain 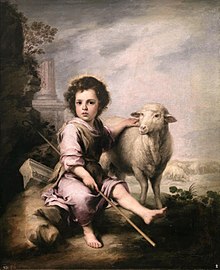 Jesus as a boy with a merino sheep, painting by Bartolomé Esteban Murillo ( Prado )

The name probably goes back to the Berber dynasty of the Merinids , who invaded Spain at the time of the Almohads (1150-1300). The Berbers raised cattle and probably brought breeding animals with them to Spain. Races similar to merino still occur today in the coastal plains in western Morocco , between the Rif and Oued Bou Regreg .

The word "merino" was mentioned for the first time in 1307 in a notarized purchase contract for 29 sacks of wool ( lana que appellatur merinus ), which the Genoese merchant family of the Usodimare had acquired in Tunisia. Some historians assume that Genoese wool merchants brought merino sheep to Spain or at least encouraged their further breeding. Spain, especially the Kingdom of Castile , then developed into the most important supplier of high quality wool. Herds of merino sheep covered up to 800 km on the half-yearly hikes between winter and summer pastures ( transhumance ). In Castile, the Mesta , an association of sheep farmers, prevented the breed from spreading. The export of merinos was forbidden by the Spanish royal family on death penalty . This enabled Spain to trade in so-called “Spanish wool” around the world until the 18th century.

Breeding in other countries

The first merinos came to Germany in the 18th century (Saxony 1766, Prussia 1783, Württemberg 1786, Bavaria 1802). Here the merino sheep were crossed with native breeds. The merino sheep and since 1860 the merino meat sheep were bred by Rudolf Behmer (born November 13, 1831 in Merzien , † February 12, 1902 in Berlin ). The merino sheep is the most common breed in Germany with almost 30% of the sheep population. In Bavaria the proportion is around 70%. The shorn, still completely cohesive woolen dress weighs three to five kilograms, half of which is dirt, wool grease , sweat and plant residues.

The import of merinos to Australia and New Zealand by European settlers made these countries the world's largest wool producers. The share of merino wool in total annual wool sales is around 40%. Almost 100% of it comes from the Australian merino sheep. In particular, the Australian production of merino wool is confronted by some animal welfare organizations with the accusation of cruelty to animals, as the mulesing method is used there to prevent parasite infestation. A part of the skin around the tail is removed without anesthesia, so that no fly infestation can occur there.

In Spain, merino sheep were previously only used to a limited extent as meat suppliers. They were too valuable because of their wool, and it was said that the long hikes would make the meat tough.

The German Merino breeds ( merinolandschaf , Merino sheep meat , Merino long wool sheep ) can actually also the group of meat sheep breeds are assigned; because also with them the meat production is emphasized in breeding. However, due to the fine merino wool, they are given a special position.