The title of this article is ambiguous. See also: The Prisoner (disambiguation) . 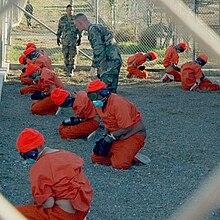 Prisoner in convict clothing and with anklet (Tasmania around 1900)

A prisoner or a prisoner is a person who is legally restricted or illegally deprived of his or her civil liberties, i.e. who is involuntarily in captivity - in  sovereign custody or in the power of criminals  .

A distinction is made in the legal system as legitimate imprisonment

Prisoners who are imprisoned for political reasons are called political prisoners . Another special form is the custody of mentally ill offenders in (mostly closed) sanatoriums and nursing homes, such as welfare deprivation of liberty in Switzerland, accommodation in Austria.

For the prisoner, the deprivation of liberty has a considerable influence on his basic civil rights; the imprisonment resulted in a restriction of the same. Tangible restrictions on fundamental rights include:

International regulations regulating the rights, obligations and other living conditions of prisoners:

A detainee ( juvenile prisoner) is also a prisoner, but only for a short time.