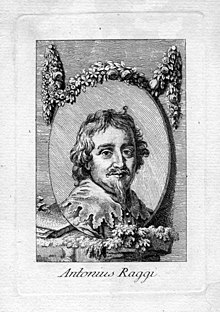 Portrait by Antonio Raggi, engraving around 1774.

Raggi initially worked in the workshop of Alessandro Algardi before he, like Ercole Ferrata , entered the service of Gianlorenzo Bernini . He became the most productive student of the great master who was to be his mentor in Rome for three decades . In the early days, Raggi only executed given models under Bernini's supervision, so that the statues from this time were marked by Bernini's complacency, as if they were by his own hand. Based on a drawing by Bernini, Raggi created one of ten angels wearing the tools of suffering on the Ponte Sant'Angelo , as well as the statue of the Danube (Danube) (1650–51) for Bernini's Fontana dei Quattro Fiumi ( Fountain of the Four Rivers ) on the Piazza Navona .

In the later years Raggi had achieved sculptural independence. He was extremely capable of creating illusionistic stucco decorations and thus giving, for example, Giovanni Battista Gaulli's ceiling fresco and the figural stucco elements in the church Il Gesù the perfect setting. His stucco work of Saint Andrew (early 1660s) in the church of Sant'Andrea della Valle follows Bernini's design and depicts the emaciated apostle as he rises into heaven on clouds and wrapped in cloth. The image of the death of St. Cäcilie in the church of Sant'Agnese in Agone in Piazza Navona was his masterpiece. The multi-figure scenery shows his preference for the painterly relief as a characteristic form of baroque sculpture. With the expansion of the pictorial space through the overlapping of the frame and the emotional intensity of the figures, Raggi appears to be transferring Bernini's art into the next generation.

Raggi completed the stucco decoration of San Tomaso di Villanova in Castel Gandolfo (1660–61), the stucco decoration of Bernini's Sant'Andrea (1662–65), the statues of San Bernardino and Pope Alexander VII for the cathedral of Siena and the statue Virgin and Child in the Church of St-Joseph-des-Carmes in Paris (1650–51). His works also include the baptism of Christ for the Borromini altar in the church of San Giovanni dei Fiorentini (around 1665). A recently found documentation shows that he also saw the kneeling figure of St. Bernard of Siena (1656–57) in the Pope Alexander VII chapel in the church of Santa Maria della Pace together with two pairs of putti holding portrait medallions on the facade created.