from Wikipedia, the free encyclopedia
This is the spotted version , flagged on March 19, 2020 . There are 2 pending changes that have yet to be viewed.

The award takes place with the handing over of a certificate and, if desired, a badge. If the German sports badge has been acquired at least five times, the number of repetitions is shown in steps of five in the badge awarded. The respective Landessportbund (LSB) will provide information about the acquisition options.

Boys and girls between 6 and 17 years of age can acquire the German sports badge for children and young people.

People with a physical or mental disability can also take off the German sports badge. The groups are divided according to age and disability. The disciplines are adapted to the restrictions caused by the respective disability, information on this is provided by the German Disabled Sports Association .

The German sports badge was created on November 10, 1912 by the general assembly of the German Reich Committee for the Olympic Games under the name Award for diverse performance in the field of physical exercise . The model was the Swedish sports badge ( Idrottsmärke ), which the founder of the sports badge, Carl Diem , got to know in 1912 during the Olympic Games in Stockholm . The general assembly of the German Reich Committee for Physical Exercise (DRA) decided on November 10th the issue and conditions of the badge. The first 22 awards were given in Berlin on September 7, 1913 on the occasion of the youth game festival. Initially, only German men who belonged to a sports club were able to obtain it. In 1921 it was renamed the German Gymnastics and Sports Badge and could now also be acquired by women. 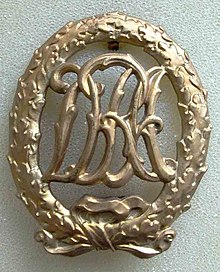 Sports badge in gold of the DRA

The conditions were taken from the Swedish model, until 2012 five conditions from five groups had to be completed, swimming was and is still mandatory today. Some requirements have remained unchanged to this day. The requirements were only divided into different age groups after the Second World War , until then everyone, regardless of age, had to meet the same conditions.

In the era of National Socialism it was since 1934 the name Reich sport badge and was on 1 July 1937 as decorations with the official name German Empire award for physical education nationally recognized. From August 1944 the Reich Sports Badge was no longer awarded.

In the GDR, the GDR's sports performance badge “Ready to work and defend your homeland” was awarded in the stages of gold, silver and bronze from 1951 . Its design was similar to that of the RSA / DSA; in the laurel wreath it was labeled "GDR". The children's sports badge was also awarded in a cross-oval shape and the youth sports badge in a round or square shape.

In the Federal Republic of Germany , the uniform conditions for the sports badge came into force on April 1, 1952. Before that, many state sports federations had already reintroduced a sports badge, such as the Bavarian sports performance badge .

From 1993, the mode of award was changed. Previously, the bronze, silver and gold levels were graded according to age. From this year onwards, the level of the sports badge was based on the number of repetitions: 1st bronze award; 3rd award silver and from the 5th award gold. The badge was awarded in gold with a number (5, 10, 15 etc.) in steps of five repetitions.

After the merger of the German Sports Confederation and the National Olympic Committee for Germany to form the new German Olympic Sports Confederation (DOSB), a number of changes have occurred since 2007. The badges were given a new shape. They now show the plain lettering DOSB in a bound laurel wreath.

The German sports badge contains disciplines from athletics , gymnastics , swimming and cycling . The disciplines are divided into four groups (basic sports motor skills), from which the athlete selects a discipline that he must fulfill. In addition, there is evidence of swimming skills:

If the DSA applicants from one of the groups discipline endurance or speed completed a swimming discipline, so that is also required for the DSA swimming skill demonstrated. Otherwise he has to prove his ability to swim in some other way, this proof may not be more than five years old for adults.

The central associations and the sports associations with special tasks can participate in the system of the German Sports Badge (DSA) through their own or sport-specific badges. Upon request, one of the four disciplinary groups can be substituted on the basis of proof of performance within the framework of an association's own badge.

Children and young people from 6 to 17 years of age can acquire the German sports badge for children and young people . The five disciplinary groups are the same as for the adults. The services to be provided are also graded according to age, gender and performance class (bronze, silver and gold). The acquisition of the sports badge at the age of 18 entitles to wear the European Youth Sports Badge (English European Athletics Diploma ).

Recognition by the Federal President

The German sports badge was officially recognized by the Federal President Theodor Heuss under Article 4 of the Order of the Order of July 4, 1958 and is a protected badge of honor under the law on titles, medals and decorations . It must, in principle at state uniforms are worn in Germany, in the Bundeswehr for. B. on the service suit as a strap buckle .

The German sports badge is a prerequisite for employment with some state police forces .

The badge showed the logo of the German Sports Federation (DSB) surrounded by oak leaves until 2006 , since 2007 the letters DOSB for the German Olympic Sports Federation have been shown in a laurel wreath . In the case of repeated acquisition, regardless of the level reached (bronze, silver, gold), the German sports badge with number (so-called bicolor badge with platinum number and platinum lettering DOSB in a golden laurel wreath) is awarded on request .

The badge is originally awarded as a metallic badge (19 × 15 mm); Variations exist in textile (patch), metallic (large badge) or textile-metallic (blue-yellow-black-green-red strap buckle).
There is a green textile badge for examiners .