The Royal Society of Chemistry (RSC) is a professional association in the UK that aims to advance the chemical sciences.

The RSC is a research organization that publishes magazines, books and databases. The company is headquartered in London and has an office in Cambridge , where RSC Publishing is based.

Types of membership and additions to names

The RSC knows the following types of membership (each with the appropriate suffix :)

In the United Kingdom and the Republic of Ireland , the RSC has 35 local chapters. In technical terms, the RSC is divided into five areas and four forums:

Twelve specialist groups are not assigned to either area or forum.

The Royal Society was founded in 1660 to promote science in Great Britain. Because of the increasing importance of the natural sciences, new findings were published in the company's own journal " Proceedings of the Royal Society " from 1800 onwards .

Advances in pharmacy and chemistry required the establishment of an independent Chemical Society of London as early as 1841 . Their new findings were published in a separate series of journals:

In 1965 three independent journal series were created for the specialist disciplines of chemistry and one for unaudited short messages. The old journal series “Proceedings of the Chemical Society” had become superfluous and was discontinued at the end of 1964. The naming of the three series - formerly A, B and C - honors the famous British natural scientists John Dalton ( physical chemist), Michael Faraday (experimental physicist) and William Henry Perkin (organic chemist).

In 1980, small independent research societies ( Royal Institute of Chemistry , Faraday Society and Society for Analytical Chemistry ) were combined with the Chemical Society to form the new Royal Society of Chemistry (RSC). 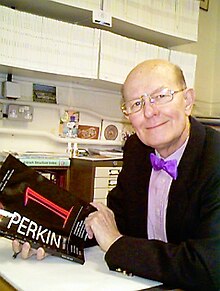 British Professor of Organic Chemistry Charles Rees with a mauve- stained fly and a Journal of the Chemical Society organic chemistry issue. The dye had been discovered by Perkin.

Like the American science publisher Wiley & Sons , the British Royal Society of Chemistry has its own literature distribution system, RSC-publishing . The RSC is a not-for-profit publisher that uses surpluses from the publishing business for the purposes of society.

The RSC awards a number of prizes and honors each year for excellence in the field of chemistry, such as the Faraday Lecture with Medal, the Meldola Medal (now Harrison Meldola Prize), the Centenary Prize of the Royal Society of Chemistry , the Sir Derek H. Barton Gold Medal , the Robert Robinson Award , the Perkin Prize for Organic Chemistry , the Corday Morgan Medal , the Marlow Medal, and the Bourke Award from the Faraday Division of the RSC.