A magic square is a square arrangement of numbers or letters that meet certain requirements.

The definition of a normal magic square is:

“A magic square of the edge length is a square arrangement of the natural numbers so that the sum of the numbers in all rows, columns and the two diagonals is the same. This sum is called the magic number of the magic square. "

The edge length is used as the order of the magic squares.

It can also be seen that any arithmetic sequence is suitable for a magic square. There are still numerous variants of magic squares for which not all of these conditions are met or additional restrictions are required (see below ).

Number squares where the two diagonals do not also result in the magic number or the target sum are considered unsuccessful and dissonant . They strive to resolve the contradiction. These failed number squares are called semi magic squares.

3rd order semimagic square with the 7 in the middle field and the numbers 1 to 9.

There are two ways of resolving the contradiction with squares of the third order. The first way is to adjust the middle element while maintaining the target amount. The second way changes the target total with the middle element unchanged. One can always find real solutions with agreement of three elements. Solutions with more than three matching elements are therefore of interest.

Because: be the sum of the numbers in a line. We have lines that should all have the same line total; and the sum over all lines, i.e. , is equal to the sum of all entries in the square, i.e. identical to ( Gaussian sum formula ).

The first magic numbers starting with are

The first three terms in this are hypothetical. A magic square with edge length 1 is trivial. For edge length 2 there is no solution with four different numbers.

It is obvious that rotation by 90 °, 180 ° and 270 ° as well as reflection on the main axes and diagonals turns a magic square into a magic square. These eight magic squares are equivalent; it is enough to examine one of them. It has become common practice to use the standard Frénicle form here :

Complement of the normal magic square

The exact comparison is made by classifying the magic squares in the solution set of the homogeneous linear system of equations. This corresponds to the classification in the non-geometric vector space. Every magic square has its precisely definable place in the solution set. The solution set is an excellent example of a non-geometric vector space. In the case of magic squares of a higher order, the method of classification reaches the limits of the imagination. However, it is didactically very interesting for 3rd and 4th order magic squares. In the case of a higher order, one has to resort to structural analysis and the method of correlation .

All magic squares have an internal structure. These structures are different depending on the order of the square and become more and more complex with increasing order. For normal 4th order magic squares there are exactly 12 structure groups with identical pair sums. These are also called Dudeney patterns after their discoverer Henry Dudeney . The images of the structures can be used to analyze the symmetry properties of the magic squares.

Example of a result of the third order solution set and :

If you specify as a further condition that the number square only consists of natural numbers , you get a finite solution set for each target sum . For 3rd order squares and there are 25 solutions (15 with and 10 without repetition of numbers).

The target sum is a free variable of the solution set of the homogeneous linear equation system. You can therefore use the calculated magic number for the target total. With the magic number 15 you get 9 solutions (8 with and 1 without repetition of numbers). This is the Lo-Shu and his court.

Example of a pandiagonal magic square

Magic squares that are both symmetrical and pandiagonal are called ultramagic.

There are numerous variants of magic squares in which the requirement is dropped that only the numbers from 1 to should appear, but that additional conditions must be met. The best known of these are magic prime squares, where all elements must be prime numbers (or 1).

For the first time there are two different magic prime squares for the mean value 127 in the solution set of general magic squares of the 3rd order.

The number of normal magic squares 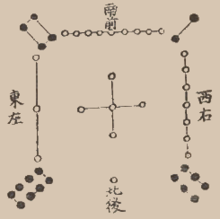 An example is the oldest known magic square from China around 2800 BC. In Europe it was in the 16./17. Century Saturn seal ( Heinrich Cornelius Agrippa von Nettesheim , approx. 1510 and Athanasius Kircher , Arithmologia 1665) called.

The Lo-Shu is the only normal 3 by 3 magic square. 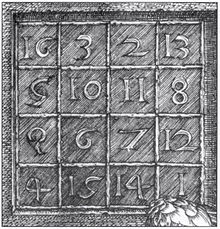 Detail from Melencolia I

One of the most famous magic squares in Albrecht Dürer's engraving Melancholia I find.

The Dürer's square has the following properties:

Due to the additional symmetry properties of the Dürer square, twin squares can be generated by means of exchange operations. Swapping column 2 with column 3 creates the square:

This twin square has identical symmetry properties. It is equivalent to the square of Yang Hui . Even Adam Ries used this square in his arithmetic book. It is shown mirrored on the main diagonal at the beginning of the article.

The magic squares of the 16th and 17th centuries in Europe

In the 16./17. Century began an intensive occupation with magic squares. The polymaths Heinrich Cornelius Agrippa von Nettesheim and Athanasius Kircher developed several magic squares of a higher order (up to 9 by 9). Algorithms for creating even and odd magic squares have also been given in the works. The assignment of certain magic squares to stars goes back to Agrippa. The Jupiter square of Agrippa is identical to the 4 by 4 square of Yang Hui . The magic squares with the designation / assignment to stars were used on many amulets.

The magic square at the Sagrada Família 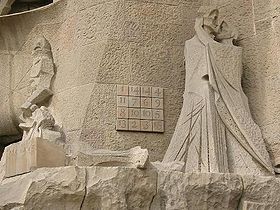 The magic square on the Passion facade of the Sagrada Família

The façade of the Sagrada Família in Barcelona , dedicated to the Passion , by the sculptor Josep Maria Subirachs , contains a magical square:

It is not a magic square in the strict sense, because not all numbers from 1 to 16 appear (12 and 16 are missing), while 10 and 14 appear twice. The magic number is 33, an allusion to the age of Christ. The number square on the Sagrada Família can be generated by subtracting 1 for 4 elements from the Dürer's square. The values ​​of 12 elements therefore agree with the Dürer's square. The 4 changed elements were chosen so that all rows, columns, diagonals and blocks / quadrants can be reached once.

Elements in Dürer's square from whose value 1 is subtracted:

Then rotate it by 180 °. The subtraction of the 4 elements causes a structural change. The square at the Sagrada Família is not centrally symmetrical. It has a bipolar structure, i.e. i.e. the sum of the opposing elements is 16 or 17.

There are many interpretations of the witch's monkey from Goethe's Faust . In addition to the assumption that it is simply nonsense, it was also interpreted as a construction guide for a magic square - an interpretation that is not one hundred percent convincing.

Construction of a magic square

There are various methods for constructing magic squares, which depend on the length of the edge. The simplest method, called the Siamese method or De-la-Loubère method, works for all magic squares with uneven edges (i.e. 3 × 3, 5 × 5, 7 × 7 etc.). You start at the top in the middle with 1 and then fill in the other numbers one after the other according to the following rule:

Based on the Siamese method, additional magic squares with double order can be created with the help of the LUX method by John Horton Conway .

Two other methods are for squares with an even edge length, one for all squares whose edge length is divisible by 4, the other for those where the remainder remains 2 when divided by 4.

A playful method for the construction of magic squares with even orders larger than 4 is possible with the help of Medjig solutions. For this you need the pieces of the Medjig puzzle. These are squares distributed in four quadrants, with dots indicating the numbers 0, 1, 2 and 3 in different arrangements. The puzzle has 18 pieces and there are three different arrangements. See the picture below. The goal of the puzzle is to randomly take 9 squares from the assembly and place this sub-assembly in a 3 × 3 square, so that in each row, column and diagonal there is a total of 9 (points).

The construction of a magic square of the order 6 with the help of the Medjig puzzle goes as follows: Make a 3 × 3 Medjig solution, this time you can choose unlimited from the total assembly. Then you take the well-known classic magic square of order 3 and divide all of the squares into four quadrants. Next, fill in the quadrants with the original number and the three derived modulo 9 numbers up to 36, following Medjig's solution. The original field with the number 8 is thus divided into four areas with the numbers , , and , the field with the number 3, 3, 12, 21 and 30, etc .; see example below.

In the same way one can create 8th order magic squares. First create a 4 × 4 Medjig solution (sum of the points in each row, column, diagonal 12), and then enlarge z. B. Dürer's 4 × 4 square shown above modulo 16 to 64. In general, several sets of Medjig parts are needed to construct magic squares of the order greater than 9 in this way. For order 12, a 3 × 3 Medjig solution can be doubled horizontally and vertically, and then the 6 × 6 square constructed above can be expanded modulo 36 to 144. The same applies to order 16.

Magic squares of size 4 × 4 with the magic number can be constructed using the following scheme, where the variables and stand for any whole number:

The magic number is each . Should z. B. be the value 88, subtract an integer multiple of 21, the remainder is then the number . : For example (as shown in the right square) .

Magic squares of this type generally do not consist of the numbers 1, 2, 3,…, 16, and if the values ​​are not chosen well , two fields can contain the same number. The magic number is not only contained in the rows, columns and diagonals, but also in the four quadrants, in the four corner fields and in the small square of the four inner fields.

The magic 4 × 4 squares, in which the quadrants also result in the magic sum, can - if one dispenses with the property that each of the numbers from 1 to 16 should appear exactly once - as a linear combination of the following eight generating, mutually congruent Squares are represented:

Note that these eight generating squares are not linearly independent because

The magic square from the copper engraving Melencolia I by Albrecht Dürer as a linear combination of the generating squares A – G:

The sum of the coefficients is natural .

The fact that the 4 quadrants also result in the magic sum does not necessarily have to be the case. The following magic square does not have this property and is therefore linearly independent of the squares A – H:

A magic letter square is a brain teaser, where the same words appear in the rows and columns of the square. An example of this is the sator square :

Are number puzzles arranged in squares