Adam Ries at the age of 58 (1550): the only contemporary illustration of the arithmetic master

Adam Ries (often also Adam Riese ; *  1492 or 1493 in Staffelstein , Fürstbistum Bamberg , † March 30 or April 2, 1559 probably in Annaberg or Wiesa ) was a German arithmetic master . He became known for his textbook, Invoice on the Linihen und Federn [...] , which was published at least 120 times until the 17th century. It is noteworthy that Adam Ries wrote his works not - as was customary at the time - in Latin, but in German. As a result, he reached a large readership and was also able to contribute to the standardization of the German language.

Adam Ries is considered the "father of modern arithmetic". With his works, he made a decisive contribution to the fact that the Roman numerical representation was recognized as unwieldy and largely replaced by the Indian-Arabic numerals structured according to the place value system . His name is generally known from the phrase "after Adam Riese" .

Adam Ries came from Staffelstein , in the preface to his "Coß" he gives information about it himself. His father Contz Ries was the owner of the stock mill there , his mother his second wife Eva Kittler.

The year of birth cannot be clearly determined. The legend on the only known contemporary portrait of the arithmetic master reads: ANNO 1550 ADAM RIES SEINS ALTERS IM LVIII . If he was 58 years old in 1550, he must have been born in 1492 or 1493, depending on when he turned 58.

The first decades after Ries was born are not documented, so it is not known which school he attended. Also in the registers of the universities that were already in existence at that time there is no reference to a degree from the future arithmetic master. In 1509 he stayed in Zwickau with his younger brother Conrad , who attended Latin school there.

The oldest known documentary mention of Adam Ries comes from April 22nd, 1517, when he appeared before the Staffelsteiner Council because of an inheritance dispute.

In 1518 Ries went to Erfurt , where he ran an arithmetic school. In Erfurt he wrote two of his arithmetic books and had them printed there by Mathes Maler.

In 1522 he moved to the young city of Annaberg , which was characterized by silver ore mining, and where he spent the rest of his life. He opened a private arithmetic school in Johannisgasse. Today the house houses the Adam Ries Museum.

In 1524 Ries finished work on the Coß manuscript , a textbook on algebra with more than 500 pages ( Coß is the name customarily used in the Middle Ages for the variable or unknown). The Coß is a link between medieval and modern algebra. The manuscript was available to his sons and students as well as to other mathematically interested people from his environment, but it was not published at the time. The printing would have caused enormous costs and other German mathematicians published comparable illustrations between 1520 and 1550. The complete manuscript was first printed in 1992.

In 1525 the marriage to Anna Leuber, a daughter of the Freiberg master locksmith Andreas Leuber, was recorded in the wedding book of the Annaberg St. Anne's Church : "Adam Reyeß Anna Filia Anders lewbers vo Freybergk". In the same year he took the citizenship oath . He initially earned his bread as a review writer with accounts for the individual ore mines, later he checked these accounts as a counter- writer and, as a tenth, ensured that the sovereign received his share of the profit.

Ries took over responsible activities in the Saxon mining administration. In the era of the flourishing mining industry, the provision of food, especially bread, to the rapidly growing population was of particular importance. Bread had fixed prices: Groschenbrot, two-penny loaf and pfennig rolls were sold. The fluctuations in grain prices were taken into account with different sized loaves of bread. On behalf of the city of Annaberg, Ries developed the so-called “Annaberger Bread Ordinance” to protect the population.

In 1539 he acquired the "giant castle" named after him, an outbuilding outside the city, the buildings of which still bear the name today. His last work appeared in print in 1550.

Adam Ries died in 1559, the traditional data differ between March 30th and April 2nd. The exact place of death is also not known, Annaberg or Wiesa .

Because the case was not then established names like today, are as contemporary notations next Ries also Ris , Rise , Ryse and even Reyes's known.

The two forms of the name Ries and Riese are used today . The form giant is also used in the phrase "after Adam Riese" .

The phrase “that's what Adam Riese does” is still used today to underline the correctness of a calculation result. It was already common in the 18th century. Abraham Gotthelf Kästner, for example, writes in his History of Mathematics 1796: "According to Adam Riesen, a calculation has long been an assurance of the truth, as was the case with the experts in geometry, QED " ( Abraham Gotthelf Kästner :) A text published in 1785 explains: "Proverb , which is not only known in Swabia, but also in our regions: According to Adam Giant's arithmetic book. [...] He was a German, lived in Annaberg and his examples were so artificial and ingenious that at that time it was thought to be the most perfect calculator that could resolve everything that was in Adam Giant's book. "( Georg Friederich Götz :) 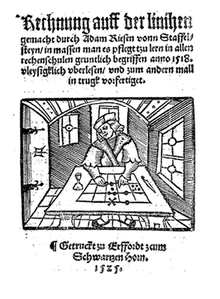 Adam Ries wrote three arithmetic books for teaching in arithmetic schools and for the training of business people and craftsmen:

Ries wrote his books in German. This promoted their spread in the German-speaking area and contributed to the standardization of the German language.

In 1524 Ries finished work on the Coß manuscript , a more than 500-page textbook on algebra.

With his wife Anna he fathered at least eight children. Three of the five sons, Adam, Abraham and Jacob, were temporarily active as arithmetic masters in Annaberg. While Abraham and Jacob died in their homeland in 1604, Adam is said to have settled in the Harz Mountains. The fourth son, Isaac, moved to Leipzig, where he worked, among other things, as a visor (calibration master). Paul, the fifth son, became a landowner and judge in Wiesa. The three daughters Eva, Anna and Sybilla each married in Annaberg.

The descendants of Adam Ries are the subject of constant, extensive genealogical research. A large number of Adam Ries descendants still live in the Upper Ore Mountains today. The Adam Ries Association has set itself the task of identifying all of Adam Ries' descendants, and has so far recorded more than 24,000 direct descendants in its constantly updated database. 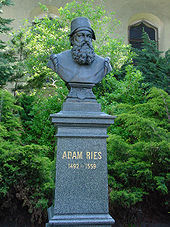