The Trajanus von Liesegang projector with the vertical approach from 1927 contains all the elements of a daylight projector. A horizontal work surface is used to project transparencies and flat test arrangements such as magnetic field lines. The projector is in front of the viewer and projects onto a screen behind the speaker.

In 1931, the “Belshazzar” writing and projection apparatus was developed based on a basic idea from Carl Zeiss. A cellophane tape was transported over a 20 × 20 centimeter glass plate on two rollers , which could be written on with a grease pen or special ink. Alternatively, glass or cellophane plates could be written on, slides or objects placed on the projection surface could be used. As with today's versions, the projection was carried out using a mirror with adjustable inclination. A water chamber was used for cooling.

In 1960 the first overhead projector appeared on the market.

How an overhead projector works

An overhead projector works similarly to a slide projector . The place of the vertical slide is taken by a horizontal, illuminated work surface, usually covered with a writable transparent film. The vertical beam path is continued horizontally to a screen with a mirror arranged after the objective . The work surface for floor-standing devices consists of a pane of glass above the Fresnel lens . The lighting below the Fresnel lens consists of a lamp , an infrared transparent concave mirror and usually a condenser lens , which is often coated to reflect infrared. The lamps used were high-voltage halogen lamps, later low-voltage halogen lamps or metal halide lamps . An economy circuit is often possible to increase the service life of the lamp. The economy circuit only slightly reduces the luminous flux , but increases the service life of the lamp considerably.

The vertical beam path is bundled by the Fresnel lens in the objective and then continued horizontally to a screen via a deflecting mirror.

The redirection on the mirror is made in such a way that the speaker working with the projector has the screen behind him and looks into the audience. He has what is to be projected in front of him, the right way round on the slide, and can add to it by hand during the lecture.

When projecting upwards, only by tilting the deflecting mirror accordingly, in addition to the distortion, there is a blurring due to the different distances between the top and bottom of the image. The image is partially out of focus because of the limited depth of field. This blurring can be compensated for by tilting the lens.

The projection is so bright that it usually does not need to be darkened, hence the name “daylight projector”. In the case of compact devices, the lighting device is located on top next to the mirror and the work surface is designed as a mirror Fresnel lens.

All designs use two standardized sizes for the size of the object field:

If the device is used in a table or projection cart, all controls on the top of the projector should be accessible. This includes the on-off switch, economy switch, an adjustment option for the lamp housing and possibly also the lamp changer. After opening the worktop, the mains voltage must be forcibly switched off and a defective lamp can then be replaced. To do this, the condenser lens above the lamp has to be opened or removed.

The distance between the work surface and the lens is changed depending on the projection distance when focusing. Since the image of the lamp must be reproduced in the lens, an adjustment is provided for the lighting device. This adjustment is not necessary when using varifocal lenses, as the distance to the worktop is not changed when focusing.

Halogen lamps 24 volts / 250 watts are used as lamps for simple requirements on the luminous flux, and halogen lamps 36 volts / 400 watts for larger requirements. For large rooms with large screen walls, depending on the ambient light 10 square meters and more, versions with metal halide lamps 400 watt or 575 watt are available. Metal halide projectors should have instant reignition.

Compact travel devices are either built like floor-standing devices but can be folded up, or they have the lighting system next to the lens in the lens head and the work surface consists of a Fresnel lens that is mirrored on the underside. The lens head can be folded flat on the worktop for transport.

Foldable travel devices can be equipped with brighter lamps, including metal halide lamps, which is not possible for travel devices with mirror fresnel lenses.

Symmetrical mirror Fresnel lenses cause the lens to be shifted from the center. This creates a small upward projection without distortion. However, the lens must depict a larger image circle.

With asymmetrical mirror Fresnel lenses, the lens can remain in the center above the lens, the requirements for the lens are less high (smaller image circle). 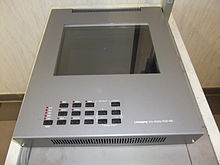 On the surface of the worktop there are retractable pins for adjusting prefabricated projection films with frames and corresponding holes. On the side surfaces of the housing, there are mounting options for accessories, for example roller devices, vertical or horizontal, or storage areas. An attachment option for a glare shield can be provided on the lens head, which may be necessary for high-performance devices despite the glare-reduced Fresnel lens.

Daylight projectors are an alternative to blackboards , whiteboards and flipcharts , also suitable for a larger auditorium . They are used to visualize facts during lectures (for example at school, at universities or during meetings). You can use coherent multi-layer foils (overlays) on one edge, which contain, for example, the lettering of a drawing or various details on foils that can be folded down later. Flat and sometimes even movable models made of transparent plastic that are suitable for laying on (e.g. for math, physics or technical lessons) are available. There are also measuring devices with a transparent display that can be placed on the projector.

In addition, overhead manufacturers themselves have brought support panels onto the market that can replace a video projector . They are placed on the work surface of the overhead projector, and this projects the image displayed on the additional device onto the screen.

Today the overhead projector is being replaced in many places by a combination of video projector and visualizer (document camera ). The image from the camera on the visualizer is transmitted directly to the video projector. This has the advantage that there is no need for transparent projection films. Normal sheets of paper can be used and written on. Alternatively, interactive whiteboards are also used.

A presentation on a computer is also possible on the video projector. Presentation programs enable a design with multimedia content such as animated texts, images and videos. A viewing section of such a program is also called a slide.

Episcopes enable the projection of non-transparent documents such as B. Book Pages. Editing during projection is not possible.