The following important information is missing from this article or section:
see talk page
Help Wikipedia by researching and pasting it . 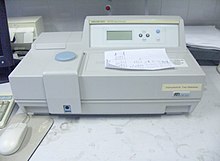 A spectrophotometer with autom. Measuring table

The term spectrophotometer (Engl. Spectrophotometer ) describes a specific variant of a photometer . In contrast to a densitometer , which only measures the reflection of a color through a specific filter ( solid density ) and thus allows conclusions to be drawn about the thickness of the ink layer on the printing material, a spectrophotometer measures the entire spectrum (from infrared to ultraviolet) by illuminating the measuring surface ) of visible light are the reflectance values . This allows the exact color location to be defined and color deviations between two measurement points to be calculated.

The working principle of spectrophotometry

Spectrophotometer decompose in spectrophotometry , the spectrum of visible light into a number of narrow bands or measuring channels (usually from 20 to 40 bands with about 20 to 10 nm width) and provide for each channel a digitized light intensity level .

The reflectance of the sample is measured after calibration to white and black standards regardless of the illumination source used in the spectrophotometer.

A remission curve is built up for the measured color from these values. This curve represents a kind of colored "fingerprint".

Like spectrography , spectrophotometry is used, for example, in criminology (in forensic chemistry , forensic toxicology, and forensic biology ).

A photo element determines the amount of light reflected by the standard and the sample and evaluates their ratio. The associated color values ​​are calculated by multiplying the measured values ​​of each band with the values ​​of the standards. Frequently used color spaces are e.g. B. the CIEL * a * b * system or the CIE system .

Two-beam spectrophotometers work according to the two-beam method, in which two beam paths, namely the sample beam path and the reference beam path, are measured. This compensates for device and network fluctuations and thus eliminates measurement errors.