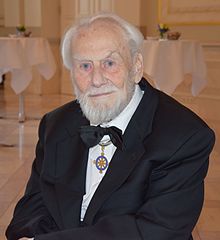 Hermann Haken (born July 12, 1927 in Leipzig ) is a German physicist and university professor . He is professor emeritus of the chair for theoretical physics at the University of Stuttgart and founder of synergetics .

After studying mathematics and physics in Halle (Saale) and Erlangen and completing his doctorate in mathematics at the University of Erlangen , he made guest stays in Great Britain and the USA .

In 1960 he was appointed to a chair for theoretical physics at the University of Stuttgart ( retirement 1995).

He dealt with nonlinear optics (especially laser physics ), solid state physics , statistical physics , group theory . Hook quickly expanded his institute into an international center for laser theory after Theodore Maiman realized the first experimental laser in May 1960. In 1962, Haken presented a completed theory of the laser that attracted international attention to the institute. The interpretation of the laser principle as the self-organization of non-equilibrium systems led to the development of synergetics in the late 1960s , the founder of which Haken is known today. He is the author of several books, including an Introduction to Synergetics, and the editor of a series of books on the subject. He later turned to uses of synergetics to study the function of the brain.