Drops of water on a hot plate float on a film of steam.

The Leidenfrost effect , also known as the Leidenfrost phenomenon , is an effect described by Johann Gottlob Leidenfrost of water droplets jumping (“dancing”) on a hot surface. 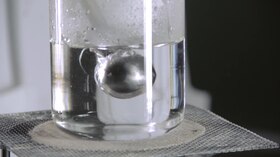 This phenomenon was first researched by Johann Gottlob Leidenfrost in Duisburg and is described in De aquæ communis nonnullis qualitatibus tractatus 1756. The writing itself is based on the ancient four-element doctrine (fire, water, air and earth ) ascribed to Empedocles (or Aristotle ) and intended to prove the production of earth from fire and water. Leidenfrost presumably "succeeded" in this experiment because it evaporated the dissolved salts of the hard Duisburg water.

Even today, if scientifically explained, described by the Leidenfrost effect a physical effect, the delayed implementation of material, so the time expanded change in the aggregate state , is based. This effect can be observed with a hot stove top with a drop of water falling on it. If the temperature of the interface is high enough to achieve rapid primary evaporation , the water droplet floats or glides on a cushion of vapor that isolates it from direct heat transfer . The steam is trapped under the water droplet and only escapes slowly. At the same time, new water vapor is created and the drop glides over the hot material like a hovercraft .

This gaseous protective layer is also created with liquid nitrogen when it hits objects at room temperature. Due to the Leidenfrost effect, it is therefore possible to run liquid nitrogen (−196 ° C) over your hand or to immerse your hand for a moment without injuring yourself. However, it must be ensured that all of the nitrogen can run off and does not collect in hollows. There is a danger when the liquid nitrogen touches materials with high thermal conductivity (e.g. a ring on the finger). There is a considerable risk of frostbite here.

Another process in which the Leidenfrost effect supposedly protects against burns, but actually doesn't play a role, is walking over glowing coals .

In the Mythbusters series , the immersion of the fingers moistened with water in liquid lead (at least 430 ° C) was successfully tested without the subject being harmed. This is also due to the Leidenfrost effect.

Measurement method for degree of purity

Although the effect has long been known and its basis is well understood, there has long been no detailed research into what exactly happens to the drops when they dissolve. In 2019, an international research group examined this question and discovered that some drops burst, while others take off when they get small enough. The cause of the bursting is impurities in the liquid; from a certain concentration of the contamination the cushion collapses and the drop falls onto the hot surface. The cracking noise caused by the bursting was already observed by Leidenfrost, but he could not explain it. Since the degree of contamination at the critical point in time depends on both the concentration in the starting liquid and the size of the original drop due to the evaporation of the liquid, this effect can be used to determine how pure the starting liquid is by varying the drop size in a controlled manner.