The Euclidean algorithm is an algorithm from the mathematical branch of number theory . It can be used to calculate the greatest common divisor of two natural numbers . The method is named after the Greek mathematician Euclid , who described it in his work " The Elements ".

The Euclidean algorithm cannot only be applied to natural numbers. Rather, it can be used to calculate the greatest common divisor of two elements of every Euclidean ring . This includes, for example, polynomials over a body .

But if CD does not measure AB, and you take the smaller from the larger alternately with AB, CD, then one number must (finally) remain that measures the previous one.
(From Euclid, The Elements, edited by Clemens Thaer , Wissenschaftliche Buchgesellschaft Darmstadt , VII book, §2)

Euclid calculated the greatest common divisor by looking for a common "measure" for the lengths of two lines. To do this, he repeatedly subtracted the smaller of the two lengths from the larger. He takes advantage of the fact that the greatest common divisor of two numbers (or lengths) does not change when you subtract the smaller from the larger.

If the difference between and is very large, many subtraction steps may be necessary. Even before Euclid, Hippasus of Metapontium used this so-called change removal geometrically for the proof of incommensurability in certain regular n-vertices: In the square or in the regular pentagon, for example, there is no common divisor (measure) of a side with the diagonal.

Nowadays is used in general, the division algorithm, described below, wherein the steps 2 and 3 are replaced by allowing, in place of the difference and , for the remainder of the division of by decreases. Another advantage of this variant is that it can be applied to any Euclidean rings (for example polynomial rings over a body ) in which the classical algorithm does not work.

The classic algorithm shown here in pseudocode for nonnegative integers a and b:

This algorithm can also be specified in a recursive version:

Nowadays, the repeated subtractions of a value that occur in the classic algorithm are replaced by a single division with the remainder . The modern Euclidean algorithm now performs such a division with remainder in every step. It starts with the two numbers and , whose greatest common factor is to be determined.

The divisor of the last division is then the greatest common factor.

Since the numbers are halved at least in every second step, the process is extremely fast even with large numbers.

The greatest common divisor of and is calculated using the Euclidean algorithm as follows:

The greatest common factor of and is thus .

In the following, the modern Euclidean algorithm is described in both a recursive and an iterative variant. Where and are the two numbers whose greatest common divisor is to be calculated.

Correctness of the algorithm

A division with remainder is performed in each step of the algorithm.

Division by remainder has the property that

In the last step of the algorithm

is and therefore it applies

As in the first step and was is 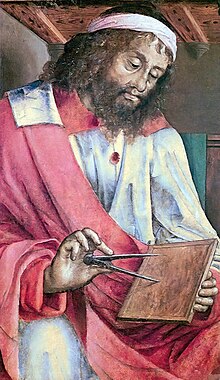 Depiction of Euclid by Justus of Ghent (15th century)

The Euclidean algorithm is the oldest known non-trivial algorithm . The procedure was started by Euclid around 300 BC. In his work The elements described. In Book VII (Proposition 1 and 2) he formulated the algorithm for whole numbers and in Book X (Proposition 2 and 3) for real numbers. The latter version is a geometrical algorithm, and Euclid called it anthyphairesis . He was looking for the greatest common "measure" of two routes: a third route, so that the length of the two original routes are a multiple of the length of the third route.

The method was probably not invented by Euclid, as he summarized the findings of earlier mathematicians in the elements. The mathematician and historian Bartel Leendert van der Waerden suspects that Book VII is a textbook on number theory already used by the Pythagoreans . Hippasus of Metapontium led around 500 BC. BC presumably performed his proof of the incommensurability of certain lines and diagonals on the basis of the Euclidean algorithm, and Eudoxus of Knidos (around 375 BC) probably also knew the method. Aristotle (around 330 BC) referred to this method in his work Topik (158b, 29–35).

Centuries later, the Euclidean algorithm was discovered independently in India and China, mainly to solve Diophantine equations from astronomy and to create accurate calendars. In the fifth century, the Indian mathematician and astronomer Aryabhata described the algorithm as a "pulverizer," probably due to its effectiveness in solving Diophantine equations. The Chinese mathematician and astronomer Sun Tzu has already described a special case of the Chinese remainder of the sentence, but the general solution was provided by Qin Jiushao in his book Shushu Jiuzhang ( Chinese  數 書 九章  /  数 书 九章  - "Mathematical Treatise in Nine Chapters" ) released. In modern Europe, the Euclidean algorithm was described again for the first time in the second edition of Bachets Problèmes plaisants et délectables, qui se font par les nombres . The algorithm was used in Europe to solve Diophantine equations and to calculate the continued fraction expansion. Nicholas Saunderson published the extended Euclidean algorithm and attributed it to Roger Cotes as a method for the efficient computation of continued fractions.

In 1829, Jacques Charles François Sturm developed the Sturm chains to calculate the number of zeros of a polynomial in a given interval. A variant of the Euclidean algorithm is used to determine the individual links in a chain.

In the past, there have been countless attempts to generalize the Euclidean algorithm to more than two natural numbers, for example in order to find, in addition to their greatest common divisor, also optimal (roughly the smallest possible) multipliers which, in linear combination with the numbers, provide this divisor. The modern state of research on this was presented by Havas, Majewski and Matthews.

The Euclidean algorithm was the first algorithm to compute integer relationships of commensurable real numbers. In recent years, further algorithms have been developed for this task, for example the Ferguson – Forcade algorithm from 1979 and related algorithms, the LLL algorithm , the HJLS algorithm (after the authors H åstad , J ust , L agarias and S chnorr ) and the PSLQ algorithm (after partial sum of squares plus LQ matrix decomposition ). In 2001 it was shown that the instability of the HJLS algorithm reported by some authors was merely due to an inexpedient implementation and that this algorithm is equivalent to the PSLQ algorithm. Its multidimensional generalizations by George Szekeres (1970), Helaman Ferguson and Rodney Forcade (1981), Just (1992), von Rössner and Schnorr (1996) and the very general approach by Lagarias (1994) are based more closely on the actual Euclidean algorithm .

In 1969, Cole and Davie developed the two-player game "Euclid", which is based on the Euclidean algorithm. There is an optimal strategy in this game. The two players start with two stacks of and stones. In each round a player takes -x as many stones from the larger pile as the smaller pile is. In this way the next player can reduce the larger pile of stones to stones, where the size of the smaller pile is. The player who completely removes a stack wins. 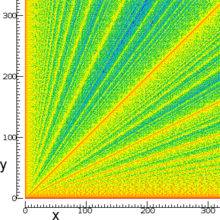 Since the time required to divide two numbers depends on the number of digits in the numbers, the actual running time is O ( log (ab) ^ 3 ) if the division is carried out naively. Due to the complete transfer of the actual calculation into the frequency domain by means of a special fast Fourier transformation , as it is used in the Schönhage-Strassen algorithm , faster reciprocal value calculation with the Newton method (in the frequency domain) for division and subsequent reverse transformation using inverse fast Fourier Transformation one arrives at a theoretical lower limit of Ω ( n⋅ log ( n )), where n is the maximum number of digits of a and b .

The variant of the Euclidean algorithm developed by Schönhage could be further accelerated by parallelization on a multi-processor system.

Asymptotic estimates are available for the number of steps, where Porter's constant plays a role.

The continued fraction can be developed from this:

This procedure can also be used for any real number . If it is not rational, the algorithm just never ends. The resulting sequence of quotients then represents the infinite continued fraction of .

As described above, the Euclidean algorithm is used to calculate the greatest common divisor of two natural numbers. The algorithm can, however, also be generalized to real numbers and more exotic number systems such as polynomials , quadratic numbers and the non-commutative Hurwitz quaternions. In the latter case, the Euclidean algorithm is used to show the important property of a unique factorization. This means that such a number can be uniquely broken down into irreducible elements , the generalization of prime numbers. Unique factorization is fundamental to many proofs of number theory.

As already described by Euclid in book 10 of his work "The Elements", the Euclidean algorithm can also be applied to real numbers. The goal of the algorithm is then to find a real number such that the two are numbers and integer multiples of that number. This task is synonymous with the search for an integer relationship between the two real numbers and , i.e. the calculation of two integers and , for which applies. Euclid used this algorithm when considering the incommensurability of routes.

The Euclidean algorithm for real numbers differs in two ways from its counterpart for integers. For one, the remainder is a real number, even though the quotients are still integers. On the other hand, the algorithm does not always end after a finite number of steps. However, if he does so, then the fraction is a rational number; so there are two whole numbers and with

Polynomials in a variable over a body form a Euclidean ring . The polynomial division is for these polynomials a division with remainder and the Euclidean algorithm can be carried out in the same way as with the whole numbers. The calculation of the greatest common divisor of the polynomials and in is , for example, as follows:

Therewith (or the associated polynomial ) is a greatest common divisor of and .

Polynomials with coefficients from a factorial ring

We hold a factorial ring (i.e. a ring with prime factorization that is unique except for units) and consider polynomials from the polynomial ring , i.e. polynomials in a variable with coefficients . In the special case , where a body, we get the ring of polynomials in two variables over .

In , division with remainder is no longer generally feasible. Z. B. and in . Polynomial division in returns the quotient that is not in . However, we can define a pseudodivision as follows: Let and polynomials off with degree or , let be the leading coefficient of the polynomial , and . Then there are polynomials such that

again being of a lesser degree than . The GCF of and can be determined by repeating the pseudodivision , but the procedure is inefficient in practice, since the factors cause the coefficients of the intermediate results to grow exponentially. To avoid this, the content of the remainder can be removed after each step , which in turn requires GCF calculations in . The GCF can be calculated more efficiently with the sub-resultant method.

Stein's algorithm , named after him, comes from Josef Stein and works without the complex divisions. He only uses divisions by two, which can be performed very quickly by a computer. For this reason, this algorithm is also called the binary Euclidean algorithm. The performance advantage on real computers only becomes apparent when the integer type exceeds the register width of the processor.

If you remember the quotients of the intermediate steps with the Euclidean algorithm , then a representation can be made

with whole numbers and find. This is called the extended Euclidean algorithm . With this, the inverses can be calculated in residual class rings .

Another extension is the algorithm behind the law of square reciprocity . With this the Jacobi symbol can be calculated efficiently.