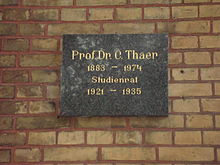 Clemens Adolf Thaer (born December 8, 1883 in Berlin ; † January 2, 1974 in Detmold ) was a German mathematics historian , university teacher and high school teacher. From 1919 to 1921 he was a member of the Prussian state assembly . After the seizure of power in 1933, he resisted the exclusion of Jews and those who thought differently.

Thaer was the second oldest of five children of the married couple Albrecht Wilhelm Thaer (1855–1921) and Emilie, geb. Fuhr (1857–1918) born in Berlin. His great-great-grandfather was Albrecht Daniel Thaer . Thaer spent his school days in Berlin, Halle (Saale) and Hamburg . His father was a mathematics teacher in Hamburg and director of the Holstentor secondary school . In 1901 Thaer passed his Abitur in Hamburg.

He began to study mathematics and physics at the University in Giessen . There the mathematician and then rector Moritz Pasch became aware of him. They started working together and produced a textbook on calculus . During his studies in Gießen 1901/02 he became a member of the student union Academic Society Das Kloster . In the fall of 1906 Thaer passed his doctoral examination in 1907 was followed by a job as a research assistant at the University in Jena . There he completed his habilitation in 1909 with a thesis on Galois' equation theory ( algebra ).

In 1913 he became a lecturer at the University in Greifswald . He registered as a war volunteer in 1916, but was soon postponed for health reasons. During the war he was appointed professor.

After the war he ran as a member of the German People's Party (DVP) and was elected on January 26, 1919 to the Prussian State Constitutional Assembly, the forerunner of the Prussian State Parliament , which sat until 1921 . In 1920 he wanted to change from university to school service. In addition to his work as a member of parliament, he entered a Berlin grammar school as a trainee lawyer and passed the assessor examination there in September 1920. He later became a teacher at the present Friedrich-Ludwig-Jahn-Gymnasium employed in Greifswald. The teaching profession (mathematics, chemistry and astronomy) fulfilled him. But he also continued to give lectures at Greifswald University.

In 1931 he began to translate “ The Elements of Euclid ”, for which (and further research) he also learned the Arabic language and which was to occupy him for 9 years. It was published in five volumes of the series " Ostwald's Classics of Exact Sciences ".

After the National Socialists seized power, his negative attitude towards the NSDAP made him increasingly problematic in his school service. He refused entry into the Nazi teachers ' association, campaigned publicly for Jews and supported the school director Karl Friedrich Wilhelm Schmidt (1873–1951), who was transferred in 1935 because of his attitude towards the Hitler Youth and then dismissed. As a result, Thaer was also transferred to the cathedral school in Cammin (Western Pomerania) on November 1, 1935 . As early as February 1, 1936, he was assigned to the advanced school for boys in Cammin. In July 1936, the Reich Minister for Science, Education and Public Education, Bernhard Rust, caused Thaers to be deleted from the university's course catalog. This ended his 22-year teaching career at Greifswald University.

In 1939, when he was 56 years old, he had to retire from school, and he was not even allowed to give tutoring in mathematics. Only after the end of the war could he teach again; he first worked as a teacher in Spiekeroog and then again for five years in Hohenwerda. He also published numerous scientific papers.

Thaer died in Detmold in 1974 and was buried in Hamburg. The Greifswald Friedrich-Ludwig-Jahn School commemorated his many years of activity with a plaque. In addition, the “Clemens Thaer Prize” for the best mathematics school-leaving certificate is awarded at the school.