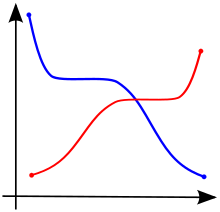 A function where is a subset of is called

Sometimes the not strict monotony terms are also defined for. The two definitions are equivalent. A synonym for “strict” is also found “strictly”, monotonically falling is sometimes also called antitone , just as monotonically increasing is also called isotonic . There is also the term “growing” instead of “rising”.

so is strictly monotonous . The proof that is strictly increasing monotonically works analogously, but with the argument that if is. This means that the function is not monotonic because it does not have a fixed monotonic behavior on this interval.

For a real monotonic function with :

Derivatives as a criterion for monotony

If the function is differentiable, the derivative can be used as a monotony criterion. The criteria for strict monotony are:

It should be noted that this criterion is sufficient, but not necessary. There are also strictly monotone functions whose derivative becomes zero, an example is given below. A tightening of these criteria can be formulated with additional requirements:

The criteria for monotony are:

These criteria are equivalences.

All of the criteria mentioned can be expanded further: If continuously on (or or ), then the statement about monotony also applies to the interval (or or ). 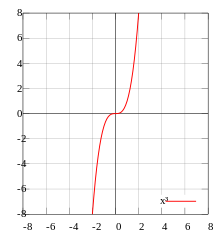 The graph of the function . The function grows strictly monotonically.

If both have different signs, then is direct . This is an example of how the first two criteria are sufficient but not necessary. The third criterion applies here: the derivative of the function only disappears in the point and is otherwise greater than or equal to zero. This is equivalent to the monotonous growth of .

Let be an interval and be strictly monotonically increasing / decreasing and continuous. Then:

If one chooses the (the space of all real symmetrical matrices) as the vector space and the semidefinite cone as the cone (or the Loewner partial order as the generalized inequality ), one obtains the matrix-monotonic functions .

Monotonic functions between vector spaces of the same dimension

Alternatively, one can generalize the property of monotonically increasing real functions that holds for any that is. This then leads to the following concept of monotony: given and a function . The function is called

If one generalizes this further, one obtains the concept of a monotonic operator .

The monotony for functions can also be defined using the difference operator . A function is then called a rectangular monotonic function if