The Control Data Corporation ( CDC ) was a 1957 by William C. Norris founded and until 1992 of existing US manufacturers of computers. CDC produced the fastest supercomputers in the 1960s and into the 1970s . At this time CDC belonged to the group of manufacturers who competed with IBM with mainframes under the acronym BUNCH (for Burroughs , Univac , NCR , CDC, Honeywell ) . 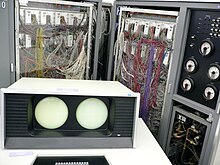 In 1965 the subsidiary Control Data Institute (CDI) was founded. With these institutes, the CDC was one of the first providers to also offer system-independent training and education. The first CDI outside the USA was founded in Frankfurt am Main in 1967 .

CDC's supercomputers came into being under chief developer Seymour Cray , who left the company in 1972 and competed with CDC with Cray Research . Crays computers outperformed the later developments of CDC, so that they came under pressure and eventually withdrew from the supercomputing business. In the 1980s, CDC was one of the most important hard disk manufacturers and co-developer of the ATA standard. In 1989, CDC sold the magnetic storage media division to Seagate . In 1992 CDC was split into Ceridian Inc. and Control Data Systems, Inc (now a division of the BT Group ).

During the Second World War, the US Navy put together a team of engineers with the task of building cryptanalytic decryption devices for Japanese and German electromechanical encryption machines. Despite the massive shrinking of the navy to peacetime after the war, this team should definitely be kept together.

Finally a solution was found. St Paul, Minnesota, owner of a Chase Aircraft subsidiary, John Parker , was about to lose all of his military manufacturing contracts with the end of the war and was looking for new ways to run his business. The US Navy never gave Parker precise information about the real field of activity of engineers. As a result, Parker was initially very suspicious of the Navy, but after a series of meetings with increasingly senior Navy officers it became clear that the US Navy was obviously very serious and he eventually agreed to employ the entire team in his military aircraft factory .

The result of this collaboration was the Engineering Research Associates (ERA). This engineering company in the early 1950s consisted of a series of seemingly disjointed areas of work. One of these working areas (projects) was one of the first commercial program computers, the 36-bit ERA 1103 . This computer was built for the Navy. In the early 1950s there was a political debate in the US Congress about the shareholder structure of ERA, which ended in legal battles. In 1952, Parker sold ERA to Remington Rand . Although Rand kept the ERA team together and directed new product development, Remington Rand soon merged with Sperry Corporation . Remington Rand had now become Sperry Rand . In the process of merging the companies, ERA was split up and incorporated into the UNIVAC Sperry division.

ERA founders later left Sperry and founded Control Data Corporation (CDC) in 1957. The CDC was then based in an old warehouse in Minneapolis (501 Park Avenue). The founding members of the CDC unanimously elected William C. Norris as chief executive officer of the new company. Seymour Cray soon assumed the position of chief designer.