The structure size or structure width (process size; see also: Minimum feature size) is a size specification used in semiconductor technology , microelectronics and nanoelectronics and describes the smallest realized (typically also equal to the minimum possible) edge length of the determining plotter -Unit. It is therefore the mask dimension , i.e. the target dimension. The dimensions of the structures produced in this way are generally somewhat smaller than the plotter unit used for the mask due to underexposure and diffusion .

The smallest structures produced on a semiconductor substrate are usually the gate length of a metal-insulator-semiconductor field effect transistor (MISFET). In this context, it is often equated with the structure size of a manufacturing process or a technology, the so-called technology node , if the term is used to refer to the entire manufacturing process geared to this structure size. However, since the smallest structure widths within a technology node can fluctuate by several percent depending on the product, this relationship is incorrect. 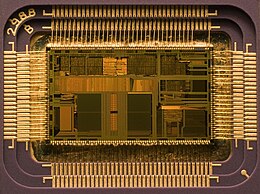 Important properties of integrated circuits correlate with the structure size used. The most important are:

Together with the increase in wafer size in semiconductor production, the reduction in the structure size forms the two key points for reducing production costs, increasing the performance and speed of semiconductor components.

The structure size is an important parameter that is determined centrally by the semiconductor process used ( CMOS , NMOS , TTL, etc.) and the smallest or selected transistor design available for it. Here, both the material properties of the carrier, usually a are silicon - wafers , and the doping , as well as the used lithographic technique and so that the necessary manufacturing parameters such as air quality, and the like up to the current availability of factory capacity important. As a rule, conclusions can also be drawn from this about the price of such production services.

Last but not least, the structure size determines how many transistors fit on a wafer and thus also how many individual semiconductors can typically be obtained from it. Together with the logical design of the semiconductor, this results in a number of chips per wafer, which has a significant impact on the chip area and thus on the price. For example, due to the technology used, NOR flashes have lower storage capacities than NAND flashes with the same structure size , since their memory cells require more transistors and thus space on the die.

So-called die -shrinks are about replacing the structure size with a smaller one while maintaining the semiconductor functionality. One and the same functional design can thus be produced in several different structural sizes. The smaller structures often have a lower power loss in the idle state and during switching, corresponding to their transistor technology, so that the maximum clock rate typically achievable for semiconductors is usually higher for smaller structures. On the other hand, if the die size is retained, there are options for expanding scalable units, e.g. B. the cache of a processor .

In the case of smaller structures, the respective manufacturer must first take a few steps to optimize the process in order to achieve the yields that were usual up to then . Accordingly, switching to a technology with a smaller structure always entails costs and risks. It is of course attempted to keep this as low as possible in advance through suitable research and trials in order to achieve economic efficiency as early as possible.

Structure sizes have traditionally been given in micrometers . This was maintained for a long time in the submicrometer range, structure sizes were given as decimal fractions beginning with zero. The last time this was done at 0.14 µm. From 130 nm onwards, nanometers were used to give a clearer overview.