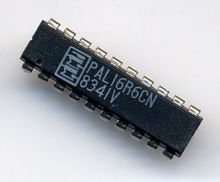 Programmable Array Logic (called PAL forshort) are electronic semiconductor components in the field of digital technology which, through programming, receive a logical link structure between the input signals and the output signals. An alternative German term was also " programmable cell logic ". They were developed in 1978 by Monolithic Memories Inc. (MMI) and produced in the following years. PALs wereprogrammedin one of the first hardware description languages, PALASM . AMD launched the PAL AMPAL22V10 (22V10) in 1983. According to the data book, theGerman Philips subsidiary Valvo manufactured programmable integrated logic circuits in 1984. In 1986, the more universal PLAs had largely displaced the PALs, which were technically older in terms of development, from the semiconductor market.

PALs are special cases of PLAs ( Programmable Logic Arrays ) and are characterized by the fact that only their AND array can be programmed. PALs can only be written to once, since the links on the chip are created as part of the programming process by means of "burning through connections", the so-called antifuse technology . The programming is usually done in JEDEC format .

A further development of the PALs and PLAs are GALs (Generic Array Logic) and the CPLDs (Complex Programmable Logic Device), which are still more recent but more complex in terms of development.

Since the mid-1990s, PALs and GALs have rarely been used in newly developed circuits and have been almost completely replaced by Complex Programmable Logic Devices (CPLDs). CPLDs have no restrictions regarding the usability of the AND / OR matrices in the entrance area, can be programmed and erased electronically, can be programmed, like Field Programmable Gate Arrays (FPGAs), in standardized hardware programming languages ​​such as VHDL , and they also include a specific one Number of registers .

As a further development of the PALs, the Lattice Semiconductor Corporation first brought the rewritable Generic Array Logic ( GAL for short ) modules onto the market. They consist of a programmable AND matrix and a hard-wired OR matrix. In contrast to the PAL, they can be written on electrically and erased either by UV light ( EPLD ) or electrically (EEPLD), which makes reprogramming possible. 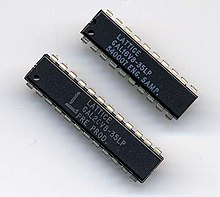 The name GAL is a trademark of the Lattice company, which means that there are some companies that use their original names to designate these modules under license, and other companies that have renamed these modules (at AMD, for example, under the name PALCE) - the programming algorithm differs here but not the pin assignment and function.

The designation indicates in the sample what kind of logic module it is and provides information about its properties. A GAL16v8 is a GAL component with 16 matrix inputs for the logic matrix, output type v (variable architecture) and has eight outputs. Then, after a minus, there is the gate delay in ns and further information about operating temperatures and the chip housing .

GAL modules have three different operating modes, which are defined by two architecture bits during programming. A third bit sets the function for outputs whether they should function as an input or output (AC1 (n), n = pin number). This means that in general every output can also be used as an input. The simple mode (SYN = 1, AC0 = 0) enables the GAL block to be used as a simple logic gate , with linking of the AND blocks with subsequent OR blocks. The complex mode (SYN = 1, AC0 = 1) allows multiplexing with the help of tri-state outputs and the last of the modes, the register mode, enables logic gates to be connected to registers using integrated D flip-flops . This means that even smaller, more complex circuits can be built without having to constantly expand the circuits with additional external logic modules.

At the end of 1988 SGS-Thomson brought GALs onto the market according to the data book mentioned.

Since the mid-1990s, PALs and GALs have rarely been used in newly developed circuits and have been almost completely replaced by Complex Programmable Logic Devices (CPLDs).

Since the mid-1990s, PALs / PLAs and GALs have hardly been used in newly developed circuits and have been almost completely replaced by the more complexly structured Complex Programmable Logic Devices (CPLDs). CPLDs have no restrictions regarding the usability of the AND / OR matrices in the entrance area, can be programmed and erased electronically, can be programmed, like Field Programmable Gate Arrays (FPGAs), in standardized hardware programming languages ​​such as VHDL , and they also include a specific one Number of registers . see: Complex Programmable Logic Device

According to Böhmer, CPLD still belongs to the group of PAL / PLA / PLD (Programmable Logic Device) and GAL, but has a more complicated internal structure in the IC. The even newer FPGAs, however, belong to a different technology.

PIN compatibility and naming of PALs and GALs

The older GALs from Lattice are pin-compatible with the much older PALs. Instead of the PAL "16L8", the GAL "16V8" from Lattice can be used. This also has 16 inputs and 8 outputs.