The chewing gum is an easily malleable, usually sweet, sometimes also spicy (mint) or sour-tasting mass in a portion pack that can often be chewed for a few hours without disintegrating.

Most chewing gum contains flavorings , medicinal chewing gum also contains medicinal substances or, for example, nicotine or caffeine , which are released when chewing and are absorbed more quickly and effectively through the oral mucosa . When absorbed through the digestive tract after swallowing the saliva , the active ingredients also get into the blood, but the blood passes the liver after the intestine , where some of these substances are immediately "washed out" ( metabolized ) from the blood again ( first-pass- Effect ).

It is known from archaeological finds that certain tree resins were chewed in the Stone Age . In Northern Europe, tar was found with dental prints from 9000 to 4000 years ago, where the dental prints were from 6 to 15 year olds. In Finland, a 5,000-year-old piece of birch resin with dental impressions on it was discovered. When archaeologists excavated a 9,000-year-old settlement in southern Sweden, they found what is believed to be the oldest birch pitch chewing gum . This foul tasting material was probably only chewed to make it soft. Similar finds are documented from southern Germany (approx. 6000 years old) and Switzerland. The Ebers papyrus reports that in Egypt during the time of the pharaohs, women in particular chewed a mixture of myrrh , frankincense , melon (for sweetening) and other ingredients. The Greeks used the resin of the mastic tree , which was also popular in the Ottoman Empire and is used as Lokum . North American Indians chewed resin from spruce trees . When the Spaniards met the Central American natives in the 16th century, the Mayans and Aztecs had a tradition of chewing tzicli or chictli . Chicle , the Spanish variant of the Nahuatl word, is obtained from the latex sap of the sapotilla or pear apple tree (Manilkara zapota), which the Indians also appreciate for its sweet fruits (sapotilla).

The first chewing gum manufacturer was the American John B. Curtis . He used an Indian recipe with spruce resin as the base material and beeswax. In 1848 he started producing his chewing gum.

The breakthrough came with the New York photographer and inventor Thomas Adams . He bought Chicle in 1857 from the Mexican ex-general Antonio López de Santa Anna . Adams tried to make a substitute for rubber from the raw material. In 1859 he came up with the idea of bringing the gummy substance onto the market as an alternative to the chewing gum made from paraffin wax, which was popular at the time. The first patent for the manufacture of chewing gum was granted in 1869.

Adams' first chicle balls were tasteless, sugar was added later, cost a penny, and was sold in a drugstore in Hoboken , New Jersey. The Adams family then expanded sales to the entire east coast. The chewing gum was sold in strips with notches that allowed dealers to separate pieces for a penny.

The first to flavor chicle was John Colgan of Louisville , Kentucky in 1875 . He used the medicinal tolu balsam , a balsam from the South American balsam tree ( Myroxylon balsamum var. Balsamum ), which was effective against coughs. The chewing gum was called Taffy-Tolu .

Thomas Adams later launched a chewing gum flavored with sassafras resin , then one with liquorice , which he called Black Jack , and which remained on the market for almost a hundred years.

A manufacturer from Cleveland, Ohio first introduced a peppermint flavored chewing gum in 1880 .

William Wrigley Jr. entered the scene in 1890. He managed to become the most successful chewing gum manufacturer in the world. His first two products, soap and baking powder, fell into disuse, but in 1893 he made Wrigley's Juicy Fruit , which became America's most popular variety. Wrigley's Spearmint followed in the same year .

In 1928 Walter E. Diemer experimented with chewing gum recipes at the Fleer Chewing Gum Company in Philadelphia, where he composed a more elastic chewing gum that allowed the formation of chewing gum bubbles and was sold under the name "Dubble Bubble". Dubble Bubble was imported and distributed by the company Süport in Viernheim .

American soldiers stationed in West Germany after World War II contributed to the general popularity of chewing gum there.

In Singapore , the sale of chewing gum was banned from 1992 to May 2004 . The reason for this was that adolescents blocked the door sensors of the MRT trains with chewing gum , which resulted in disruptions in the operation of the metro system. However, private imports for personal consumption were not affected. The sale of chewing gum is now permitted with restrictions.

It has been proven that chewing gum has a positive effect on attention . The stimulating effect of chewing gum comes not only from the ingredients (for example spearmint ), but also from the work of the masticatory muscles , which improve the blood supply to the head and thus the blood and oxygen supply to the brain . In addition, that is the brain by the irritation of the dense with nerve traversed oral cavity excited; it has both stimulating and relaxing functions. There is some evidence that chewing helps manage stress.

The tooth-damaging effect of certain ingredients in normal chewing gum, especially sugar , is partially offset by the tooth-cleaning effect. There are also sugar-free chewing gums as well as special dental care chewing gums , including those that contain granules , which are supposed to additionally clean the teeth.

Chewing gum produces additional saliva, which protects the lining of the esophagus in the case of reflux by diluting the stomach acid.

One of the undesirable side effects is, for example, that excessive chewing of the gum (i.e. in large quantities) can lead to gas.

Contrary to popular belief, chewing gum does not stick to the stomach when swallowed. In the stomach or, at the latest, in the small intestine, all digestible ingredients, such as sugar, are extracted and absorbed. The remaining indigestible mass is excreted. Only in people with gastric or intestinal mobility disorders can swallowed chewing gum clump together.

Today there are many different varieties and uses.

It is particularly elastic and was specially developed to make large bubbles. Disadvantage: quickly loses taste.

Chewing gum generally causes an increased flow of saliva as a result of the chewing movement, which neutralizes acids which are harmful to teeth. They are ideal for traveling when there is no possibility to brush your teeth. Dental care chewing gum is usually sugar-free and, like toothpaste, contains traces of minerals that support the regeneration of teeth.

This chewing gum does not fight the odor-causing bacteria, but covers the odor with its higher proportion of aromas, but only for a short time.

Nicotine gum replaces the nicotine in cigarettes with the nicotine in chewing gum. The dosed nicotine replacement is intended to alleviate withdrawal symptoms and reduce the desire for cigarettes. According to the definition, it is not chewing gum (which is chewed on), but drug depots that should remain as quietly as possible in a cheek pocket. Only occasionally should you continue to chew briefly when the taste and with it the release of active ingredients subsides.

These chewing gums are supposed to reduce discoloration of the teeth with the help of micro-granules, i.e. by grinding.

Chewing gum for diarrhea or constipation

Chewing gum produces more saliva than usual. Since the salivary fluid contains electrolytes that work against diarrhea, the diarrhea is inhibited. On the other hand, excessive consumption of sugar-free chewing gum with added sugar substitutes causes diarrhea or constipation.

Medical chewing gum with active ingredients that work against motion sickness ( antiemetics , e.g. dimenhydrinate ) are available from various manufacturers . These can be used, for example, on air or sea travel. However, because some of these agents reduce vigilance , they are generally unsuitable for drivers.
Since there are frequent pressure changes in airplanes, it is also recommended to chew a piece of chewing gum and thereby move the ear trumpet. That helps with pressure equalization.

Up until the 1970s there were over 20 chewing gum brands in Germany. The most famous brands were Hillery, OK, Pulmoll, Americana. Today the Wrigley company dominates the market.

The only Swiss chewing gum manufacturer is Chocolat Frey . The Migros announced in August 2019 that the controversial additive titanium (IV) oxide (E171) at the in-house brand of chewing gum Skai'll no longer annexed initially for a large part of the range.

Israel is the most varied market, where you can buy European, Asian and African varieties.

Chewing gum as an art object

"Žvýkačka" ("Chewing Gum"), sculpture in front of the Nová scéna theater in Prague

A giant chewing gum adorns the square in front of the Nová scéna theater in Prague . “Žvýkačka” is the Czech word for chewing gum; This is what the Prague artist Pavel Karous called his sculpture as part of the “Art meets the (PRAHA) streets” campaign.

The London artist Ben Wilson paints chewing gum that has been spat out and stuck on the pavement. He uses special acrylic paints and takes up to ten hours to create a picture.

In San Luis Obispo , the Bubblegum Alley , whose walls have been covered with used chewing gum for decades, has become a tourist attraction. There is also a well-known gum wall in Seattle . 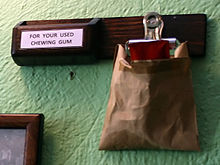 Sale of used chewing gum in a pub in Dublin

Weathered chewing gum on a sidewalk

Commercial chewing gum is not biodegradable. If chewing gum is simply thrown away, it will stick to the street, clothes, shoes, etc. and it usually takes several years before it disintegrates.

Spit chewing gum is a big problem for cleaners. They cannot be removed with simple means such as sweeping or brushing. The city of Cologne, for example, removes chewing gum residues with a special device that processes the dried-up residues under superheated steam and using (environmentally friendly) surfactants so that they can then be removed by brushing. Fines for spitting out chewing gum are being imposed in more and more cities. Cologne imposes fines of € 35 to € 50 here. Collection boxes for chewed chewing gum (so-called gum walls ) have been used in various German cities since 2018 .

Meanwhile, a biodegradable chewing gum called Chicza has been developed. The gum of this chewing gum is made in Mexico from the latex of the pearapple tree .