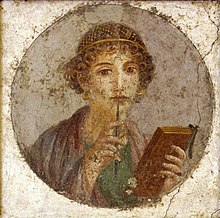 Girl with wax tablet book and stilus ( Herculaneum , around 50) 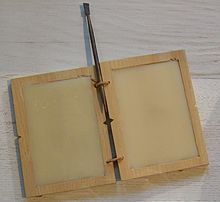 Replica of a Roman wax tablet with three styluses 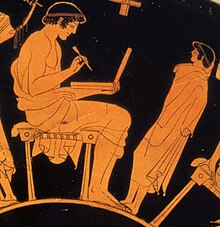 The wax tablet ( latin tab cerata ) is a highly rectangular usually writing board of wood (also ivory or metal), the one or both sides with wax is coated. It was widespread from antiquity to the Middle Ages , and in a few regions it was even in use until the beginning of the 20th century. The writing was with a stylus ( Stilus scratched) in the wax surface.

Several wax tablets could be connected with simple hinges to form a wax tablet book ( codex ). A two-part wax tablet book is called a diptych , a three-part triptych , and a multi-part polyptych . These designations are also applied to codes made from unwaxed tablets.

Wax tablets were in use early on by the ancient Greeks , Romans and Etruscans . The earliest mention of a wax panel diptych can be found in the 5th century BC. At the Greek historian Herodotus . The poet Homer already had a message conveyed in a diptych in the Iliad (8th or 7th century BC), but did not mention the material of the writing surface. In the story of Bellerophon , Proitos , the king of Tiryns , who suspected him of adultery with his wife Anteia, gives him a plaque asking his father-in-law to kill him:

"But he sent him to Lykia, and
he gave him sad signs , words of death scratched on a folded table:
That he should present the writer to his father-in-law and lose his life."

More recent wooden writing boards have been found on the west coast of Asia Minor .

Wax tablets were used for almost every kind of record in ancient times : notes, schoolwork, bills, and other business records. Wax tablet books could be sealed and were therefore suitable as letters that could be erased by the recipient (cf. Stilus ) and answered on the same wax surface (evidence from Cicero , Seneca , Augustinus, among others ). Original wax tablets have been found in large numbers. Those with preserved inscription come from u. a. from the cities buried by Vesuvius in 79 AD. In Pompeii there were 153 wax tablets with business records of the banker Lucius Caecilius Iucundus . Not far from Pompeii, in Murecine, the wax tablets of another family of bankers have been unearthed. These documents are important evidence of Roman legal and economic history. Literary texts have also survived on wax tablets: on wax tablets from the 3rd century AD from Palmyra ( Syria ) in the University of Leiden (Netherlands), the so-called Tabulae Assendelftianae after its discoverer H. van Assendelft de Coningh, are excerpts from the work by the fable poet Babrios (2nd century AD).

In late antiquity , ivory diptych lids can be decorated with figural carvings of great artistic value. They were popular as valuable gifts. The consuls in particular used to give away such treasures when they took office (so-called consular diptychs ). Numerous ivory diptychs from late antiquity have been preserved because they were reused as book covers in the Middle Ages .

In terms of church history, wax tablets (here: Diptycha ecclesiastica ) were used in the Middle Ages to keep lists of names of the living and the deceased for whom prayer or thought was given.

Some medieval documents for wax tablet books (then often with a semicircular upper part) can be found, for example, in the Manessische Liederhandschrift ; as an example, reference should be made here to the representation of Gottfried von Straßburg in the same.

Wax tablet with a semicircular top

Usually wax tablet books were made of beech or pine wood , more rarely of oak or maple . Luxury specimens were made of ivory , gold , silver, or other metals. It is believed that the English “book” can be traced back to the Anglo-Saxon “boc” (beech).

A recess following the shape of the table was cut into the actual table on one or both sides. This recess was between one and three millimeters deep and mostly provided with grooves or notches at the bottom of the recess. These grooves, mostly arranged in a diamond shape, were intended to allow the wax to stick better in the recess.

The panels themselves were often made simply rectangular or with a semicircular top. Simple versions had little or no ornamentation, others were richly decorated on the outside (especially carvings), with showpieces up to inlays made of bone or ivory or fittings with gold leaf.

For practical reasons (to protect the wax layer and the writing), two, and in rare cases more, tablets were usually bound together like a book. The panels were connected to one another in such a way that the sides of the wax panels provided with wax came to rest on top of one another. In the simplest case, the connection of the individual panels was made by means of, for example, drilled and glued leather strips or nailed leather strips as hinges, in more complex cases also by means of metal hinges.

The size of the wax tablet books varied from small, for example about A6 large "notebooks", which were also used as such and accordingly carried around. Other, more stationary specimens, such as the above-mentioned Diptycha ecclesiastica , reached almost A3 size and sometimes consisted of more than 20 "pages".

In the case of smaller specimens, in some cases a groove was apparently cut into the surround surrounding the wax in order to accommodate the stylus when folded, which could then no longer fall out when the wax tablet book was closed.

Some specimens were also provided with notches for a lacing. The wax tablet books could also be sent like a letter by means of a lacing. The lacing could still be sealed, with sealing capsules acting as protection for the seal, especially in Roman times .

Beeswax was heated and mixed with other additives, which improved the viscosity of the wax or prevented the wax from unintentionally liquefying at high summer temperatures. For this purpose, several other additives were sometimes added to the wax, for example linseed oil , tallow or turpentine , as well as tree resin or, more rarely, wood tar .

A typical composition of a wax mixture was

The colorants used for the wax were mostly soot (black to deep black color) or birch pitch, but more rarely color pigments for dark green colorations or, for example, auripigment (for deep yellow coloration). However, dark colors were predominant.

The still liquid wax mixture was then poured into the recesses of the tablets to cool. Wax spatulas could be used to apply the wax and smooth the entire surface even after extensive use .

The stylus for a wax tablet is a simple pen that is sharpened on one side and has a T-shaped widening or a spatula-like flattening at the rear end, with which a wax tablet could be smoothed out again and the writing thus erased.

The stilus was made of bone , ivory or metal, more rarely of glass or various woods. For the Roman period, finds made of iron predominate (some with non-ferrous metal inlays ), bronze styli and bone styli seem far more rare. There are hardly any wooden stiles to be found in finds - but this can be related to poorer chances of preservation.