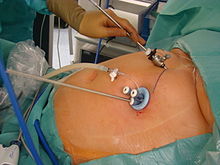 A gastric band (English gastric band ) or English gastric banding is a medical treatment method for pathological obesity , which cannot be treated by diets and conservative treatment measures, in which a silicone band or silicone ring is attached below the transition from the esophagus to the stomach. Together with other methods, the gastric band belongs to the spectrum of bariatric surgery, the surgical treatment of pathological obesity . It is the last resort when conservative methods of weight loss have failed. The indication for gastric restraint is given from a body mass index of at least 35–40.

By narrowing the stomach diameter in the entrance area, a permanent significant weight reduction can be achieved. For this purpose, an adjustable silicone band is placed around the gastric fundus in a laparoscopic operation . The diameter of the opening can be changed by filling the band with liquid; a corresponding access (port chamber) is placed in the abdominal wall or in front of the breastbone.

Costs will be covered by the health insurance companies

In Germany, the health insurance companies will pay for the gastric band if the medical necessity has been proven. This is usually the case if the patient has a BMI > 40 or a BMI> 35 with serious side effects (e.g. diabetes, joint diseases, etc.), all conservative treatment options have been exhausted (ultima ratio) and the patient has been informed and informed is motivated. In addition, the risk of surgery must not exceed the risk of other possible interventions.

Effect of the gastric band

According to various studies, the following effects of the gastric band on the patient are assumed: