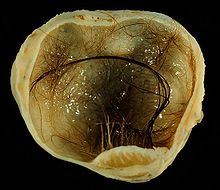 Teratoma of the ovary with skin tissue

Tissue containing teeth, skin, and hair from a teratoma of the ovary.

Teratoma of the ovary with hair and teeth

A teratoma (from the Greek teras " terrifying image , monster" and the suffix -om , here in the sense of "similar", hence "monstrosity"), formerly also called miraculous tumor , is an innate, often organ-like mixture of swelling , consisting of primitive, pluripotent stem cells developed. A distinction is made between mature (koätane - benign) and immature (dedifferentiated - malignant: teratocarcinoma ) forms.

The teratoma is a germ cell tumor that can therefore develop in the direction of all three germ layers . Mature forms (such as dermoid cysts ) may contain tissue such as hair or teeth that would not otherwise be found where they appeared and that did not result from metaplasia .

It is mostly in an encapsulated form that contains various differentiated types of tissue, for example skin , hair , teeth , muscle and nerve tissue . So if it contains well-differentiated tissue from all of the cotyledons it is called an adult or mature teratoma; Immature or embryonic teratomas, on the other hand, contain poorly differentiated epithelial or mesenchymal tissue. Teratomas are particularly common in the testes and ovaries .

Teratomas make up 15–20% of benign ovarian tumors. 15% of the tumors are bilateral . More than 80% of mature teratomas occur during the reproductive phase. They are rare in children or after menopause .

Teratomas arise from primitive, pluripotent germ cells. Therefore they are counted among the germ cell tumors . The germ dispersal theory is used to explain the pathogenesis . It is assumed that germ material remains in the embryonic development and could not develop further.

Teratomas usually consist of tissues from all three cotyledons , which can sometimes be arranged like an organ. It is being discussed that stem cells form tissue that is completely untypical for the environment (hair, teeth, skin - but also, to some extent, liver, kidney or heart muscle cells). The dermoid or dermoid cyst (also known as “dermoid tumor”) as a mature teratoma contains skin material (sebum glands, squamous epithelium and hair follicles) in its walls .

Mature teratomas are easily recognizable macroscopically. A cystic cavity is filled with yellow sebum-like material mixed with hair. The lining of the cyst is like skin . One or more polypoid formations consisting of fatty tissue protrude into the cyst lumen (so-called head humps). Teeth, bones, cartilage, thyroid tissue or brain tissue can in some cases be observed macroscopically.

Respiratory and gastrointestinal tissue, thyroid, salivary gland and, rarely, the retina, pancreas, thymus, adrenal gland, pituitary gland, kidney, lungs, breast and prostate are derived from the endoderm . A lipogranulomatous inflammation can often be detected in the cyst wall as a reaction to the contents of the cyst. Malignant degeneration of individual tissue components occurs in only 2% of all dermoid cysts. The most common are squamous cell carcinomas or adenocarcinomas .

Teratomas, which consist of only one type of tissue, are also called monodermal teratomas. B.

Fetiform teratomas, which consist of a cyst that contains structures similar to a malformed fetus ( homunculus ), are very rare .

The patients are often asymptomatic depending on the location of the teratoma. Occasionally, those affected notice an increase in the circumference of the abdomen, a bulge in the lower abdomen, or complain of stomach pain. 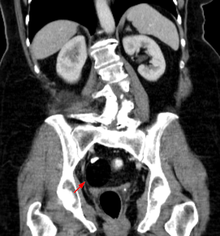 If teeth are present, the diagnosis can easily be made radiologically ( projection radiography , computed tomography CT).

The decisive factor for the treatment is whether the teratoma is benign or malignant. Benign teratomas are usually only removed surgically, immature teratomas (or teratomas in men) are also treated with chemotherapy. By cisplatin exceptionally good cure rates are -based chemotherapy, depending on the location, accessible.

Complete surgical removal in sano (R0 situation) is considered to be an adequate therapy for mature teratomas; even immature teratomas of childhood can be extracranial localization according to Marina et al. adequately treated surgically.

The milestone for the successful treatment of germ cell tumors was set in the 1970s with the introduction of cisplatin-based chemotherapy. Cisplatin is considered to be the most effective agent for treating germ cell tumors, although attempts have been made to replace cisplatin with carboplatin in view of its cumulative nephro- and ototoxicity .

Possible complications are twisting of the tumor with infarction , perforation, bleeding into the abdominal cavity and auto-amputation of the tumor. A sudden rupture can lead to the acute abdomen . Emptying of cyst contents can also cause granulomatous peritonitis .

Since the tumor forms stem cells - from which hair, teeth, etc. differentiate - the tumor is of great interest to developmental biologists, as it offers the possibility of obtaining stem cells.

Microscopic foci of teratoma can grow locally and lead to compression of the surrounding structures; this observation was referred to by Logothetis in 1982 as the "growing teratoma syndrome". The clinical definition of a GTS requires