The craniopharyngioma (composed of Latin cranium = the skull, Greek pharynx = throat, "-om" medical ending for tumors ), also called Erdheim tumor after the first descriptive pathologist Jakob Erdheim , is a benign tumor caused by a malformation of Residual tissue in the area of ​​the pituitary gland is created. The malformation of the remaining tissue already arises in the embryo , i. H. even before the birth. The reasons for this disorder are not yet known. The benign (benign), possibly cystic tumor visible on magnetic resonance imaging images arises from remnants of the Rathke pouch from which the anterior lobe of the pituitary gland arose during pregnancy. The tumor is therefore in the area of ​​the pituitary gland. 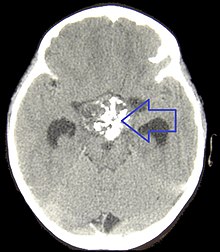 CT image of a craniopharyngioma

Adjacent parts of the brain such as the pituitary gland and hypothalamus are responsible for the formation of many hormones that are responsible for growth, weight regulation, puberty development and fluid balance. Often the first symptoms of the patient consist in the failure of these hormones, which are caused by the fact that the craniopharyngioma crushes the pituitary gland and the hypothalamus and makes them inoperable. In addition, in the immediate vicinity of the craniopharyngioma, proteins are formed in the brain that play an important role in the day-night rhythm, the ability to concentrate and the patient's eating behavior.

100x histological enlargement of an adamantinous craniopharyngioma, HE staining

Treatment of a child or adolescent with a newly diagnosed craniopharyngioma is usually done through surgery. The responsible neurosurgeon will make the decision about the surgical procedure (how and how much surgery / relief should be taken). Often the craniopharyngioma cannot be completely removed, because otherwise severe damage to the neighboring brain areas is to be feared. Then radiation is sometimes necessary to prevent the craniopharyngioma from growing further.

With the exception of a few cases in which the pituitary gland does not have to be removed, the patient will have to replace hormones that are missing regularly and for life in the form of tablets, nasal sprays or subcutaneous injections after the operation . About half of all patients with craniopharyngioma develop a z. T. considerable overweight . Visual impairments that existed before surgery often do not resolve. Disturbances in memory and attention are described in the patients.

More detailed research into the DNA of the modified cancer cells in order to be able to develop an effective gene therapy may now have opened up the possibility of treatment with an already approved drug . In papillary craniopharyngiomas, a defective BRAF gene was found, which activates a serine-threonine kinase if it is defective . This enzyme can be blocked by vemurafenib , which has been approved in Europe for the treatment of malignant melanoma since March 2012 . The same study found that many patients with adamantine craniopharyngioma carry a mutation in the CTNNB1 gene . This inactivates the protein beta-catenin , which is responsible for cell adhesion . However, it has not yet been investigated whether these therapies also work in practice. Above all, the small number of cases could lead to problems.