In LCH, the tumor cells are derived from Langerhans cells . These originate from the bone marrow and are assigned to the classic tissue macrophages and thus to the mononuclear phagocyte system (MPS). In the electron microscope can often Birbeck granules (tennis racket-like, lollies pentalaminäre granules) demonstrate. The tumor cells S-100 , vimentin and CD1a (on the cell surface) are positive immunohistochemically . The Birbeck granules can be seen as X-bodies under the electron microscope. Hence the "X" in the earlier naming. The morphology of the lesions can vary based on the age of the lesion. Early lesions usually show many typical and proliferating Langerhans cells. As the lesion ages, there are fewer Langerhans cells. It is rare to find no Langerhans cells or necrosis in the lesions .

The disease manifests itself through pain in children and young adults. It is not uncommon for bones located on the surface (rib, skull) to have doughy swelling. The LCH is often considered to be cancer due to the uncontrolled growth of cells. It also shows characteristics of autoimmune diseases, as LCH lesions attract immune cells and show typical tissue inflammation. LCH is clinically diverse and often difficult to diagnose. Skin involvement disorders in infants may look like a diaper rash, while bone involvement on X-rays may be mistaken for sarcoma. In its most aggressive form, LCH can occur as a leukemia-like disease and lead to organ failure.

In the X-ray image , osteolysis is in the foreground, an infestation of the lungs can be recognized especially in the computed tomography by the " Cheerio sign ". In the extremities , the diaphysis is primarily affected, otherwise short flat bones such as the skull bones relatively often . The detection of a flat vertebra , vertebra plana, is diagnostically groundbreaking .

The soft tissue components as well as the osseous destruction can be clearly demonstrated in the ultrasound ; the stepped, different destruction in the bone (tabula externa) is characteristic of the calotte .

The diagnosis is usually confirmed by a biopsy from a tumor (see pathology). LCH must be differentiated from non-Langerhans cell histiocytoses ( class II histiocytoses ).

A distinction is made between three disease entities within a development hierarchy in terms of course, prognosis and clinical presentation, which can often not be separated exactly.

Ultrasound section of an eosinophilic granuloma on the skull of a one-year-old child with a large soft tissue tumor and significantly smaller, undermining destruction of the outer parts of the skullcap

The unifocal or multifocal eosinophilic granuloma is the localized form of Langerhans cell histiocytosis. It is their most common form and accounts for around 70% of cases.

Mostly the patients are children or young adults under 30 years of age. 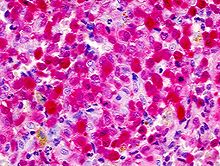 In the medullary cavity of the bones (often the thighs , skull bones and ribs ) multifocal or unifocal tumors from erosively expanding and sometimes multinucleated Langerhans cells are found here . There is a partly load-dependent, partly also nocturnal localized bone pain. Usually there is a colorful accompanying infiltrate of eosinophils , neutrophils , lymphocytes and plasma cells . Tumors can also manifest in the lungs , skin, and stomach .

Unifocal foci can recede spontaneously or be excised or irradiated . Multifocal foci are variable in the course and depending on the organ affected (see Lipton score ).

The Abt-Letterer-Siwe syndrome is the acute and disseminated form of LCH. It is the most severe form and accounts for around 10% of Langerhans cell histiocytoses.

The patients are usually younger than two years. Adults are rarely affected.

If left untreated, the disease is quickly fatal (in 90%). With intensive chemotherapy , possibly with stem cell transplantation , the survival rate is significantly better.

The infiltrates, which predominantly consist of Langerhans cells, are mostly in the area of ​​the skull bones and the soft parts of the skull.

In about 30% of the people affected, there is a systemic attack involving the liver , spleen , lungs , skin and lymph nodes . The classic Hand-Schüller-Christian triad with bone lesions, exophthalmos and diabetes insipidus occurs rather rarely.

With systemic involvement of multiple organs, there is a poor prognosis and the need for aggressive chemotherapy and possibly a stem cell transplant . Otherwise the disease can resolve itself.