from Wikipedia, the free encyclopedia
This is the spotted version , flagged on March 17, 2020 . There is 1 pending change that has yet to be viewed. 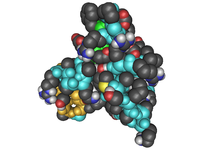 Space-filling model of IGF-1 based on NMR structure data

Insulin-like growth factor ( English insulin-like growth factors , IGF ) or somatomedins are polypeptides that have a high sequence homology to insulin show and as growth factors act (growth and differentiation of cells). They are formed in the liver cells , but also in other fetal or adult tissues. They are part of a complex system that body cells use to communicate with their environment. This system, which is often referred to as the IGF axis , consists of two membrane receptors (IGF1R and IGF2R), two ligands , a group of six IGF binding proteins (IGFBP 1-6), and some IGFBP-associated proteases .

Insulin-like growth factor 1 (IGF-1), also called somatomedin C (SM-C), is a growth factor that is structurally very similar to insulin . It is mainly from the liver after stimulation with the from the pituitary derived growth hormone somatotropin secreted . IGF-1 can exert its effect via membrane-bound IGF receptors. These can be detected in almost all tissues and most cell types. It plays a major role in the growth phase of the organism. A gene deletion of the IGF-1 gene has corresponding consequences. Studies have shown that IGF-1 has an influence on the regulation of both physiological and pathological states, especially in cancer development . An influence on cell proliferation and the prevention of apoptosis was described. IGF 1 consists of 70 amino acids in a single chain with three disulfide bridges and has a molar mass of 7.6  kDa . The genetic information of IGF-1 is encoded on chromosome 12 . IGF-1 can also be used to treat degenerative muscle diseases.

Insulin-like growth factor 2 (IGF-2), also called somatomedin A (SM-A), is a growth factor that seems to play an important role in early cell development, i.e. possibly in the fetal phase, while IGF-1 tends to increase is responsible for maximizing growth at a later point in time.

IGF-2 and research into tumor growth

The subtyping of liver tumors based on the special activity of IGF-2 and IFN-regulated genes (see also interferons ) is possible. The involvement of IGF-2 in brain tumors in childhood and in breast cancer is also noteworthy . Chronically elevated serum levels of IGF-2 (as well as IGF-1) could also have a decisive influence on the risk of the development and progression of prostate cancer . The genetic information of IGF-2 is encoded on chromosome 11 .

Use as a doping agent

IGF-1 is often used as a doping agent , for example in bodybuilding . A positive effect on hypertrophy through the supply of IGF-1 in healthy adults is speculative and has not been proven by studies. The Center for Preventive Doping Research at the German Sport University Cologne announced in September 2011 that it had developed a method to detect the synthetic derivatives of IGF-1. The procedure was approved by the World Anti-Doping Agency Wada.

The misuse of IGF can cause the following side effects: