Mud volcano in the Romanian Carpathians (near Berca )

Mud volcanoes , also called mud diapirs , are morphological elevations that often have the shape of a volcano and from which water-saturated mud emerges at more or less regular intervals, often together with methane .

The formation of mud volcanoes can be traced back in many cases to so-called "cold volcanism " (which is actually not volcanism in the narrower sense, but geologically called diapirism ), in which slurried clay-rich sedimentary rock due to its relatively low density and the swelling capacity of the clay minerals in the earth's crust ascends. A prerequisite for this process is usually rapid sedimentation of clay deposits in connection with pressurized water. The ascent of water-oversaturated sediment is often linked to weak zones in the earth's crust that arise in areas of tectonic compression . The same deposit conditions that favor the formation of mud volcanoes also lead to the formation of hydrocarbon deposits , so that these often occur together. The cause of the eruption of a mud volcano can be a sudden release of pressure from the water-saturated sediment due to an earthquake; in some cases, mud volcanoes also originated from drilling during the exploration or extraction of oil deposits.

In contrast to cold volcanism, molten rock rises from the earth's mantle during hot volcanism . Mud volcanoes are often confused with the mud pots that are driven by heated water in geothermally active areas.

So far, 1100 active mud volcanoes are known. Their diameter ranges from a few decimeters, as on the Caribbean island of Trinidad, to eight kilometers.

Mud volcanoes can be found submarine as well as on land. Submarine mud volcanoes exist off the Norwegian coast (e.g. Håkon Mosby, see below), in the Barents Sea , in the Gulf of Cádiz (e.g. Al Idrisi ), in the Black Sea or in the Caspian Sea , as well as off the coast of British Columbia and the Caribbean .

Other mud volcanoes are known in Russia , Ukraine, the People's Republic of China , Myanmar and Taiwan, or on Sumatra . In America, there are active mud volcanoes in Alaska , California , Venezuela, and Colombia . The mud volcanoes on the Colombian Caribbean coast are interesting for tourists due to the possibility of taking mud baths in them, namely the towering volcano "Totumo" between Cartagena de Indias and Barranquilla and the much flatter one at Arboletes , which is less frequented by bathing tourists .

The submarine mud volcano Håkon Mosby is located at 72 ° north on the continental slope of the western Barents Sea in 1270 meters water depth. It rises about 12 meters above the sea floor and has a diameter of about 950 meters. The mud emerges at a temperature of 26 ° C, the normal sea temperature is −1.8 ° C. The mud volcano releases several hundred tons of the greenhouse gas methane every year . Much of the gas dissolved in the water does not reach the atmosphere . It is distributed in the sea water during the ascent and consumed by methane-processing bacteria . However, eruptions damage the bacteria films on the ocean floor that hold back most of the methane. 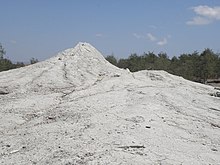 In Oesilo (Special Administrative Region Oe-Cusse Ambeno ) there are several mud volcanoes south of the town of Saben in Suco Bobometo .

In the municipality of Viqueque , the Raitahu mud volcano is located near the sea .

The northernmost mud volcanoes in Italy are located on the northern edge of the Apennines . The mud volcanoes of Nirano south of Modena and, further west, those of Regnano are relatively well known . A whole cubic kilometer of mud is said to have leaked out near Regnano in 1835 and wreaked havoc on the site. Also famous are the fires of Pietramala , burning outcrops , which were already described by Alessandro Volta and mentioned by Michel Montaigne in his "bathing trip". However, the flames have meanwhile been extinguished due to the decrease in pressure in the reservoirs as a result of the extraction of natural gas. The same applies to the burning outcrops at Barigazzo. Currently (as of 2008) there is only one permanently burning natural gas source in the Apennines.

Since autumn 2013 there is a new one (sometimes also called Geyser ) in the Provincia di Roma near Fiumicino near the “Leonardo da Vinci” airport . This has formed on the island of a roundabout .

Other mud volcanoes are said to be active in the province of Ancona (including Il Cenerone) and near Monteleone di Fermo. The Bolle di Malvizza ( Castelfranco in Miscano in Campania ) is better known . In contrast, the specimens at San Sisto ( Montalto Uffugo ) in Calabria , which the Atlante Fisico-Economico still identifies in the 1930s, are no longer active today.

In Sicily , small mud volcanoes (Macalube) occur near Aragona north of Agrigento ( Macalube di Aragona ) and near Caltanissetta ( Macalube di Terrapelata ), where there was a major eruption in 2008. Natural gas sources burning at times are the Fuoco di Censo (without mud), the outcrops at Paternò southwest of Etna and a small one northeast of Etna at Fondachello. The area of ​​the Macalube di Aragona has been closed by a court order since September 2014 because two children were killed after an unexpected violent eruption with 20 m high mud.

On May 29, 2006, a mud volcano began to erupt in the east of the Indonesian island of Java in the area of ​​the city of Sidoarjo. See the main article Mud Volcano on Java .

The formation of islands has been reported three times in two places off the coast of Pakistan, most recently on September 24, 2013 on the island of Zalzala Koh in six to seven meters of shallow sea off Gwadar . This bubble-throwing islanding in the Arabian Sea is expected to level out again like the other two before.