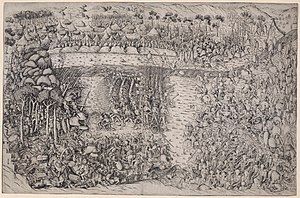 French illustration of the Battle of Fornovo around 1500

The Battle of Fornovo , also known as the Battle of Taro , took place on July 6, 1495, 30 km southwest of Parma . The Venetians and their allies temporarily succeeded in driving the French out of Italy . It was the first major battle of the Italian Wars .

In the years before 1494 , Ludovico Sforza , who ruled the Duchy of Milan for the minor Gian Galeazzo Sforza , tried to take over power completely. Against this, King Ferdinand I of Naples , who was Gian Galeazzo's father-in-law and as such a. a. together with the Medici wanted to shift the balance of power in Italy in his favor. After Ferdinand I died in 1494 and King Charles VIII of France laid claims to the throne of Naples (which had already been held in the 13th century), France and Milan allied themselves in a common power interest against Naples. In order not to endanger the European balance of power, Charles VIII coordinated with his neighbors, who were compensated partly with money and partly with land. Ludovico received Charles VIII and his army in Milan with all honors. In Florence , Piero de 'Medici also opened the gates to the French, who, however, were driven out by the people under Pier Capponi in an uprising. This fate also befell the Medici, who had to bow to the new movement of the penitential preacher Girolamo Savonarola . Charles VIII went on plundering to Naples, which had been abandoned by the Aragonese court. Only now did the Italian states begin to understand that they had allowed a foreign army to march through their country, which in turn was beginning to appreciate the flourishing Italian renaissance . On March 31, 1495 , the Republic of Venice , Spain , Milan (under the new Duke Ludovico Sforza), Pope Alexander VI. and the Roman-German King Maximilian I. the Holy League of Venice against the expansion plans of France. The French then had to rush to withdraw from Naples and Italy. On their retreat they suffered many losses, for example at Fornovo.

The League of Venice appointed the Margrave of Mantua , Gianfrancesco II of Gonzaga, as commander-in-chief of the joint army, which in early May 1495 began to attack the French supply lines in Italy. On May 20, Charles VIII withdrew from Naples with his troops suffering from syphilis and all sorts of booty. On July 4, the French force, which was still about 5,000 strong, reached the town of Fornovo on the Taro , where the troops of the League blocked their way.

After negotiations had failed, the French sent a reconnaissance team , which was immediately put down by an Albanian mercenary force . Running out of supplies, the French attacked in three meetings on July 6th . The first meeting ( Gian Giacomo Trivulzio ) consisted of 300 horsemen, 200 men of light infantry and 2,000 German mercenaries armed with spears, the second meeting (Charles VIII) of 600 horsemen and the majority of the (German) foot troops, the third meeting 400 horsemen and about 1,000 foot soldiers.

Francesco Gonzaga divided his powers into six lines. He wanted to attack the first and second French combat groups first and then surprise the enemy with the main body from behind.

A first cavalry attack on the foremost French lines had only moderate success because of the unfavorable terrain. On the French side, the rain neutralized the gunpowder and with it the artillery . Later on, the league gained the upper hand thanks to the use of the Venetian reserve , but the spontaneous plundering of the French entourage prevented complete success. After the stratiotes had satisfied themselves with the looting, they preferred not to take part in the now quite bloody battle.

After an hour of fighting, the French withdrew. They had lost 1,000 men, the Venetians and their allies over 2,000. In addition, the French lost all of their booty made during the Italian campaign.

Since the remaining Venetians after the battle because of their undisciplined Stratioten not nachstoßen and thus were able to reach a decision, succeeded remaining troops of Charles VIII. A happy retreat over the Alps. Charles VIII had achieved nothing on his Italian campaign. After he died a year and a half later, his successor Ludwig XII tried his hand at it . again in Italy and had a little more success. For Italy, this French campaign to Fornovo initially apparently had no further consequences. But both Italy and Europe had become aware that gleaming Renaissance Italy was politically weak and easy prey for the rising European powers. With the Italian wars, almost all Italian states lost their independence in the first half of the 16th century at the height of their economic and artistic development. Until the Risorgimento, Italy became the pawn of the great European powers.