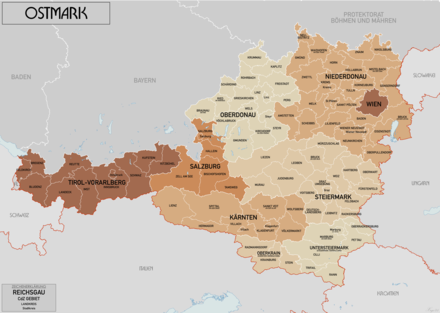 → Main article : History of the State of Salzburg

Since 1925, districts of the NSDAP were founded in the Republic of Austria and in the German Reich. Because of the party ban in 1933, these institutions were illegal until 1938. During this time, Anton Wintersteiger was the leader in Salzburg .

In Parteigau was 1938-1941 Friedrich Rainer and from 1941 until the war ended Gustav Adolf Scheel Gauleiter and in personal union Reich Governor at the state level. Anton Wintersteiger was his deputy . The governor until 1938 Franz Rehrl was arrested.

When the Nazis marched into Salzburg on March 12, 1938, they met with broad approval. On April 30, 1938, a book burning took place on the Residenzplatz in Salzburg , staged by the SS man, teacher and writer Karl Springenschmid . The Reichsgau Salzburg was founded on May 1, 1939 with the law on the development of the administration in the Ostmark , which existed until 1945. In the cultural sector, Joseph Goebbels took over the reorientation of the Salzburg Festival .

The administrative units of the Gau were: