The Rin spring below the mountain village of Amden , Canton St. Gallen , Switzerland is the largest karst spring in the Churfirsten - Säntis region and one of the largest in Europe.

It is located on the rocky slopes to the north above the Walensee and drains the area between the Walensee and the Toggenburg . There is an extensive water cave behind the spring . Access to the cave is reserved for cave divers ; see also caving .

The spring is dry several times a year and no water flows out of the cave portal. The Rinquelle pours an average of 2650 liters per second. During floods, the discharge is up to 30,000 liters per second. In this case, the water thunders down as an imposing waterfall over a 40 meter high rock face into the lower of the three steps of the Seerenbach Falls . 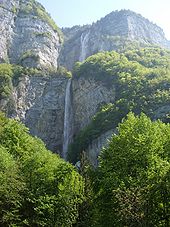 Seerenbach Falls with the Rin spring at the bottom, from the right

The entrance area of ​​the cave was first entered by researchers in 1953. The first dive took place in 1959. In 1963 a fatal accident occurred during another dive. In 1969 the working group Rinquellenforschung began to deal with the cave. She managed to overcome the entrance area. Diving distances of up to 450 m were achieved. In 1972 the German Jochen Hasenmayer was called in, who a year later managed to emerge in a side passage after a diving distance of 930 m. This made the Rin spring the longest known underwater cave at the time. The main research period ended in 1981.

The cave is mainly in the Betlis limestone ( Lower Cretaceous ). The underlying, damming layer consists of globigerines - marl ( tertiary ). The cave entrance (source) is in the area of ​​a less pronounced syncline .