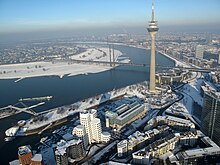 The Rhine knee is metaphorically a section of a river bend in the meandering Rhine , whose sharp bend is reminiscent of the knee of a bent leg. The Düsseldorf Rhine bend separates the districts of Hafen , Carlstadt on the right from Oberkassel on the left bank of the Rhine .

The right bank of the Rhine on the knee of the Rhine represents a so-called impact bank , because the river flow "collides" with the bank here. To fortify the bank, a bank wall was built and basalt stones were poured. Through the bend in the Rhine and its bend in the river, the districts of Oberkassel and Niederkassel take on the shape of a peninsula . Here flat banks with gravel banks and wide Rhine meadows characterize the river landscape.

On the right bank of the Rhine , the knee of the Rhine is the location of the Rheinturm , the Rheinkniebrücke and the state parliament of North Rhine-Westphalia , where it forms the natural boundary of the government district of the state capital .

Other striking bends in the Rhine are in Basel and Bingen .

Not far from the Düsseldorf Rhine knee, more precisely on a line between Rheinallee in Düsseldorf-Oberkassel and the Lausward power station , the photographic basis for the picture Rhein II by Düsseldorf artist Andreas Gursky was created in 1999 .